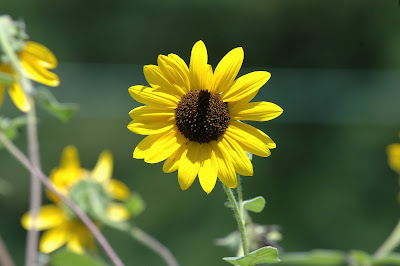 I think it is about time that I re-mention the Free Speech controversy again. While I might listen to the argument for some kind of a minor fine for stupid speech I have already done my duty to support the idea of free Speech. I really have to hold my nose from time to time when I hear people say things that just smell bad in the light of day. It is not in my normal behavior pattern to "suffer fools gladly" and I will often tell people what a stupid thing they say when they say things that even a simple man like me couldn't believe. I guess my laughter and size keeps me mostly out of fights when I say things. I really haven't had a fight since I learned to kill people in Basic Training. Good thing that!
These mid-term elections are shaping up like they might be a lot of fun to watch come election day - eve. There is money leaking out all over the place in spite of the best intentions in the law to limit spending. I think there should be a law that makes it a crime to spend more money on the election than the job pays. I would hold everyone to that from the School Board to the Presidency. Money should not be able to influence voters, but it does. I would ban the PAC's that can throw money into the fight without any accounting for the source. I wouldn't go back and use it as a weapon to kill the PACs, only make it the law out in the future.
What I find funny is the things people say in elections. For example, the current Attorney general of Kansas could read the tea leaves and see that once the Democrats got their act together they were going to pass some kind of Health Bill. He didn't join in a six State lawsuit to oppose it to save the Taxpayers the added expense. Now his opponent is saying that he supported the Health Bill. There is a hell of a long distance between not opposing a bill and supporting it. Even as a kid I knew when dad took off his belt, someone was going to get a whipping. Get it now or get it later. It was only a matter of time and it didn't matter how much I cried to mom.
Real Leadership in Congress would come up with a plan to make some kind of a plan to help seniors invest in America to help pay off the national debt. I for one would be glad to have a program that paid off the debt to the Chinese if I could deduct it from the taxes I owe. Hell, I might even be willing to cut my Social Security payment down to help that cause. I'm not saying that there is any way I would take it from those seniors that rely on the payments for their entire support. You can bet your bippy that I would want any funds collected for this be put in a strongbox and paid for the cause it was intended. I think that even a fool can love his country and fear his government.
The weather here is so nice in the afternoon that it makes you want to get out and play in the yard, ride a bike or just throw a stick to the dog. I have done a little of all three in the past couple of days and need to shut this off here so I can do some more right now. (9.947 Miles on the trail at lake Shawnee & 7 throws throws to TACO)
MUD
Posted by MUD at 2:19 PM