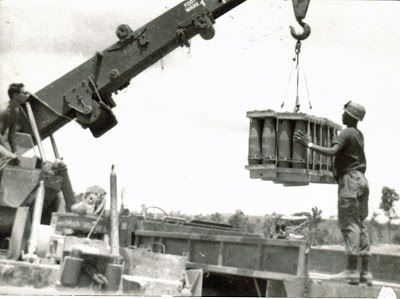 Waitin' at the Convoy Control Point 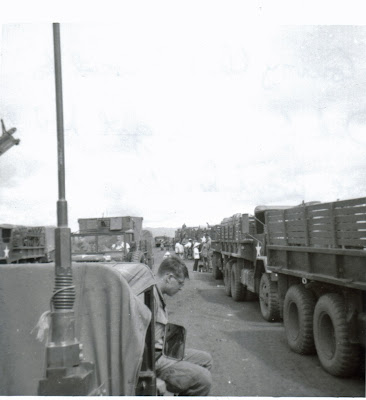 When I was assigned as the battalion Ammunition Officer for the 1st battalion, 92nd Field Artillery based in Pleiku, RVN, I was often assigned the duty to fly convoy cover for our attempts to restock the Ammunition Supply Point (ASP) that had been emptied during TET 1968. We ran daily, 10 truck convoys up the highway through Kontum to Dak to. We would take our trucks over to the ASP by Camp Inari in Pleiku and load them overnight and get back to the convoy start point about breakfast. If we were lucky, there would be time to catch a hot breakfast and load up a C-ration lunch. If we were lucky, we all managed to catch a couple of hours of sleep there in our jeep or in the truck.

A little over half the time, I would get in the back seat of a bird dog and fly convoy cover for the entire convoy. Those times I didn't fly, I rode in a jeep with our trucks and talked to the local Artillery units as we went north. It didn't take very long for the guys to notice that when I was with them in a jeep, the convoy didn't get ambushed where I was. The convoy was shot up in the lead and we were in the back. When we were near the front, they hit the back. I'm sure that it was more luck than anything. One time I was flying and our unit was right in the kill zone when the ambush blew down. I called for artillery and it was bedlam for about an hour as I put up an artillery blocking fire and the gun trucks attacked right into the ambush.

Where my troubles were was the fact that every damned fast mover in the entire area wanted to get up and drop some ordinance. Every time one would show up, I would have to stop the Artillery and allow them to work over the enemy soldiers. If you haven't ever flown in a single engine airplane at about 90 miles per hour, you don't realize how slow it seems. The silver and green tracers are pretty as they are streaming up past you until you think that they are only about every 5th round and you are in a thin aluminum skinned aircraft. In case you haven't been so informed, the US tracers are red.

I managed to spot a position up on top of the mountain near the ambush site. It looked like a command post the VC had to control the entire time. One good thing about the check fire for the fast movers was it gave me a chance to look around and we spotted the command post. I was able to fire on the mountain top and shortly there was no one moving there. We continued to fire behind the ambush site and there were many enemy soldiers moving away from the ambush site and trying to escape through the blocking artillery fire. We were able to move the fire deeper into the jungle and I'm sure that they paid a pretty heavy price for getting to blow up a couple of trucks. The only wounded guy from my unit was an idiot that was way back from the kill zone where there was interlocking machine gun fire from the enemy. He got out and ran up to the point of impact where a 7.62 (or close) bullet tore through his thigh. No broken bones but he did have a pretty scar to show when he got back home. In fact he was back with us in a short couple of weeks. My unit had orders to never stop in the middle of an ambush and had continued to drive forward through the worst of it. One of the trucks that had been shot up was ours and the crew had jumped out of the truck when the engine was hit.

I am not sure how many days later, I was flying convoy cover and our unit got hit again. After the fire stopped, the guys reported that one of our trucks was again hit and someone had seen it being towed towards Kontum. I asked what they had in the truck and the guys said that there were five or six mail sacks for all the units in Dak To as well as mail for our forward batteries. We had landed there in Dak to, refuel and eat. My jeep was waiting there by the ASP for the other trucks to unload. I asked the pilot if he needed me for the return trip and he agreed that there was never an ambush in the morning and the afternoon on the way back. I jumped in the jeep and took off towards Kontum to locate the mail sacks. It was probably dumb as I look back on it as we could have been ambushed anywhere along the road but I didn't care. The trucks had been unloaded and they followed me back down the road. Momma duck and her ducklings following me.

About five miles north of Kontum, I found a wrecker towing our five ton truck. The bed was covered with a poncho or a tarp and the wrecker driver was not very happy to have me stop him and look in the truck. I climbed up in the back of the truck and threw back the tarp. Shit oh dear, someone had put the bodies of three soldiers from another unit in the back of our truck. No mail bags but there were those bodies to deal with.

I knew that at LZ Mary Lou there was a graves registration unit. We pulled the truck there and it was time to unload the bodies. I told a couple of my guys to get up there and hand down the bodies. It just happened that both of those soldiers were black. No way LT, they weren't going to handle no dead bodies. I didn't think about the fact that some of the soldiers might be spooked by dead bodies. About that time one of the guys from the graves registration unit came out and had a cart to move the bodies with. He and I unloaded the bodies. A quick check was made and it was fairly clear that the three soldiers had been killed by the concussion of a rocket propelled grenade (RPG) Not a pretty day for us.

That night when we returned to our base camp at Artillery Hill, our Battery Commander cancelled the night load at the ASP. We got a chance to eat a hot supper, take a shower and sleep in our own beds. I never did find out what happened to those mail bags. We took our wrecker to Kontum the next day and drug that truck home.

I tell people that I have been shot at and missed and shit on and hit. Mortars, machine guns and a rocket have been fired at me and not a thing ever hit me. Just luck.