Bottle in my Bed Roll 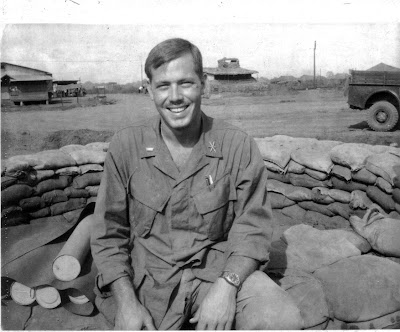 Lt Petty on a Sober Day

In 1968, I spent a year in Vietnam doing what I was assigned to do. I held a bunch of different jobs and in my humble opinion did them as well as I could. One job that kept popping up was the job of filling in as a Forward Observer when there was need. Most of the jobs were just a few days for a special operation or relief when someone went on R&R. There was one job that was a bit longer and this is a short retelling of that adventure.

The 3rd Bat, 503rd Infantry (173rd Abn) was needing to send a Forward Observer home to Augusta, Kansas when his dad had a heart attack. Augusta was only 15 miles from my home on the east side of Wichita and it was kind of fun to hear the stories his recon team told about the Adventures the Augusta Flash performed and retold the story. When he got home, he had a bout of Malaria and what was to be a couple of weeks turned into 6 weeks of hearing jokes about being a non airborn trooper out there in the jungle with them.

The first day I reported to the new Company Commander he stressed that he did not allow any drinking in the field. It was unfortunate that I had managed to find a Class VI store with a quart of scotch just before i got to the field. I immediately confessed to the Commander about that bottle and told him that I would pack it away in my Ruck and he was welcome to inspect the seal at any time. It was way too dear to throw it away and He agreed that as long as the seal was unbroken I could carry it.

What I didn't know was that during that in-briefing discussion, one of the old Sergeants heard the conversation about the bottle and soon I was inundated with offers to buy the bottle. Each day, the price went up a little and I grew more and more resolved to honor my agreement to keep it in my ruck and sealed. In six weeks, the price was well over $200.00 and the Captain and I had a few god laughs over the growing price. I offered to let him inspect the seal and he never did.

Most of the six weeks I shared with the unit, we were in the field. A lot of it was triple canopy jungle and hills just to the north of Saigon. That entire time is at least a chapter in my book someday. How a convoy of elephants could slip past our company in the jungle was one of the adventures. The Bird Dog pilot found the elephants a few days later and when he shot it there were "secondary" explosions from the ammunition the elephant carried. He even had an elephant painted on the side of his plane.

When we finally came in from the field, the offer to buy that bottle just got even more unreal. I just smiled and said "no Thank you" to their offers. We got in to the base camp about 2 PM and I went down to the airstrip looking for a ride to a major city with an airport to fly back to Pleiku. I filled a part of my 2 quart Canteens with half of the scotch and some water. I sat there on the side of the runway and drank that nectar of the gods. I'm not sure when, but I gave up trying to talk my way on a helicopter about mid afternoon and just finished that scotch.

The next day I got a ride early and filled the canteen with the rest of the scotch and nursed most of it on the way back. Sometime in the middle of the day I got as near back as Ahn Kay and hitched a ride on the back of a supply convoy from the 4th Division. The truck had a bunch of new sand bags in bed and I crawled up there and started to sleep. I fell asleep and felt the convoy start to move out. Sometime a little later, an MP woke me up and asked who I was. I showed him my ID card and confirmed the fact that I was on my way back to my real unit. I didn't think any more about it until almost a month later.

I got a call from the Battalion Commander that I was wanted back in base Camp and needed to get there as soon as I could. I wrangled a ride on a chopper and was back there the next day. After I had a good nights sleep and a few good meals, I reported to the Battalion Headquarters. I asked the S-1 if he knew what was up and he just shook his head. I had to wait for a while to get a chance to get into the Lieutenant Colonel's office. I reported and saluted the best I knew how. He didn't tell me to sit down or to be at ease. That's a bad sign if you have never had an official meeting with you commander's commander.

It started with LtCol Cade digging out a slip of paper and reading from it. It was a DR from that damned MP reporting that I was drunk on duty and as the senior member of the convoy derelict in my duty by letting it go ahead without proper authority. For a few minutes, I couldn't even remember the event and didn't have a clue what had happened let alone the driver of the Truck's name. I figures that I was in a heap of trouble and about to get enough "Ah Shits" to cancel all my "Atta Boys" I had on the books.

Finally I just confessed that I didn't have a clue what the report was all about. I was told to sit down and think about it. There was a calendar there on the desk and I did some quick looking at the dates. I remembered that I had ridden back to Pleiku on the day the report said but was pretty darned sure that I was in no way in charge of the convoy. When I told the boos that I had been out for 6 weeks after being told the assignment would last only a couple of weeks. I had abottle and got damned drunk with that bottle I carried for six weeks. he laughed and told me that he would send a letter back through channels that I had been given a verbal reprimand and there would be no repeat of the event.

I have always wondered if in the official archives some where there is a report of a Drunk 2nd Lieutenant in dereliction of his duty. I'm that Huckleberry.