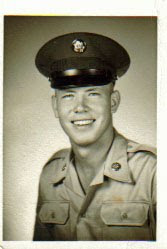 There are a few pretty serious questions I think about now and then. Lets see if the questions make any more sense than the answers.

In 1965, I started college at Wichita State University (WSU). Your freshman year, ROTC was a mandatory subject and like everyone else, I took the requires class and drill day. At the end of the registration table was a person with a card to be sent to the draft board and filling it out would get you a deferment from the draft. Guess who skipped that step, on purpose? Yep, being 19 in Wichita in 1966 was like joining and I had the perfect way to stay out of the beaten zone. Is there a question in there? Do I feel a draft?

In spite of all the good advice to never volunteer for anything all the adults males told me about the Military, I volunteered for everything I could. I took the extra test to see if I was material for Officer Candidate School (OCS). I took the Military Driver's License training and did not wind up pushing a wheel barrow. I drilled in the evening on a Demonstration Drill team one of the Cadre started and I played the tom-tom drums when we marched back and forth from everywhere. When asked, I went to the OCS screening Board and agreed to go to Fort Sill, OK and give it a try.

When I saw that the Advanced Individual training Class was an OCS Prep class I stuck it out and put up with 8 weeks of tough training and stupid rules. There were about 200 the first day and that number got down to about 35 when we completed training. Why would a 19 year old boy from Wichita do that?

By attending OCS, I committed myself to an additional 10 months in the Army. If I wanted out as quick as I could, why would I do that? For a little extra GI Bill time? Perhaps, maybe, nah that's stupid. When OCS started, we had drop outs by the dozen. In my Platoon we were bunked in a a areas we called a cubicles. There were me and three others in our cubical to start and by the end we were down to two. That was the rule in our class until the 8th week when we finally developed a Motto to "Cooperate and Graduate." I was the late night gunnery instructor in the latrine. We could leave the lights on in there and I know that a bunch of guys would not have made it without someone to help make the details a lot clearer. High Angle fire, MET + VE, and Rocket Gunnery were all tough. Understanding Logarithms and survey was a challenge that few understood and it seemed I did. Why would I give up sleep to help a bunch of guys I didn't even really know?

During OCS, I applied for Flight School. What could be more natural than a Kid from the Air capital of Kansas to fly in the Military? Why would I get clear through the process down to signing the paper and then not do it. It may have been the fact that Rotary Wing did not have a ring that I liked but then again, why not?

By completing OCS, I was about guaranteed a trip to SE Asia and that didn't include Korea. That was a tour as a Forward Observer in a Combat Zone. Darned good way to get killed. I knew they were building up to having 500,000 boots on the ground and was pretty sure mine were to be included. Why would I do such a thing.

Right prior to going to Vietnam, I met and married a wonderful person. Why would anyone want to get married and then head off into a darned good chance to make her a widow? I guess after 40+ years that question was asked and answered but it does seem kind of silly.

In 1969, I drove out of the gate at Fort Carson, Colorado and threw my hat in the ditch. I swore an oath that I would never wear green again. Two years later I joined the National Guard and when I graduated from KU I went to work full time for the Guard. I guess I should stop swearing but I can't help it. The other day I read a book and a character in the book was asked, "Why would you do such things?" He answered, "it wasn't because I wanted to do them, It was because I was incapable of not doing them!"

I get to the end of the whole line of questions and answers and sometimes find myself asking, "What do I want out of Life?" I guess at 63, almost 64, I better find out soon or the thing I will be getting out of life is ME!