When was the happiest time in your life?

All you had to do was walk outside in the summer and you could get a bunch of kids that were willing to baseball on the lot on the north end of Byrd Street.  For the biggest part, only the older kids had ball gloves and for the most part they were second hand.  All of the ball gloves were used by both sides when their teal wasn't at bat.  I would say we had batting orders but heck, I don't remember the names any better today than I did then.

The other day, some one made reference to hitting the cover off the ball and most of the under 40 kids didn't have a clue what this meant.  We would play with the old base balls until literally someone  would hit the ball and the cover would fly off into nowhere.  I can remember a time or two when we tried to play with the uncovered ball but it would very soon unwind the string and it would be unplayable.

My Dad worked for Beech down at the end of the street and the Beech Aircraft Employees club had several activities for the kids of the Beech employees.  I guess you could say there were a lot of little son's of Beech - Crafters out there.  I played little league baseball several years and had a lot of good times.  Every summer there would be a day at Joyland where we could basically ride for free and mom and Dad could play bingo or whatever event they had that day.  At least once a month, Beech Employees Club would have a free late night skate at the Skating rink in Kiddie Land.  We did that a lot.

One of the major past time activities among my friends was riding our bikes as far as we could.  To accomplish that, we often had to tighten chains and grease the wheel bearings.  One on trip, my bike got so hot that the hub of the front wheel started to smoke.  There was water in the ditch and I dipped the wheel hub in water.  It cooled off enough to let me get home.  That afternoon we tried to grease the bearings and they came out of the housing as individual balls with out the metal retainer.  We had to cannibalize on of the old bikes to find a wheel that would first of all fit and then work.

One of the kids I went to school with had a Dad that ran a trash truck.  Leon would help his  Dad and he had first choice of the bikes other people would throw away.  He would take pieces and parts of the bikes and make custom bikes that really looked neat.  You could buy one from him pretty cheap.  The only bad part is they really didn't last long.  I spent $8.00 one summer on a bike that didn't last until fall.  I had to mow lawns to earn that money but hey I didn't really expect much.

I guess the point of all of this rambling is that this weekend we drove through the old neighborhood and it sparked a lot of memories.  So as I smiled away the short drive, I had a flood of good thoughts.  If that is what happiness is, I would take another trip through that time just for the kicks and giggles.

MUD (aka Wheezer from the Our Gang Comedies)
Posted by MUD at 12:44 PM 1 comment:

How do You Define Happy

I guess this need a jumping off point and because it is my blog, I need to be the first Frog in this contest.  So, here goes.

First I think the fulfillment of needs and wants should be on the list.  I refer back to Maslow's Hierarchy of needs and say that I am well past the "need" for shelter, safety, and food.   I also mix in a little of the Leadership training I taught to Officer Candidates a few years back.  It is the area of motivators that a lot of lives fall short.  Recognition even if it is self provided is a basic given.  If you remember to praise in public and punish in private you have a good start.  Where do you start and end that journey?

Once upon a time, (for you Military types adjust this to hey, this ain't no shit.)  I was given an Artillery Battalion that for many reasons had not passed an Army Readiness and Training test (ARTEP) a couple of times in a row.  To me, it was a simple thing to make sure that everyone knew what their job was and to make sure they could do it.  It was a great big elephant but no tough task for 400 guys to eat one bite at a time.  Instead of trying to do everything, I tried to make sure that the leaders knew what they needed to do.  That worked and we passed the ARTEP.  At the end of the big formation on the parade field at the end of camp, I shook the hand of each man in the battalion.  My hand hurt but they all knew that "we" did it.  I went home happy that day and it still gives me a warm spot in my memory.

Now that I am retired, I think about the things I need to do to be a social animal and talk to others.  I sang with a Barbershop chorus but it felt like I was asked to do more and more and the only feedback was negative.  I have stopped going to meetings and I am not sure if there is room for me to bring that back into my life.

With the last election in the bag, I have a lot of friends that think the majority (or at lest the Electoral College) and me, got it wrong.  I won't go into the reasons why I did not vote for Hillary but only to say that our system needed change and I didn't see Hillary as much other than more of the same.

This is an article that was printed in the 1st Bn, 92nd FA Newsletter.  The only part that is incorrect was the unit I was assigned to.  I was in SVC Battery, 1-92nd FA not HHB.  The jobs I did for the Battalion was while I was in Svc Battery and an additional assignment because the Battalion really did not have room for me to be assigned to HHB.  The Information about B Btry is correct.
MUD 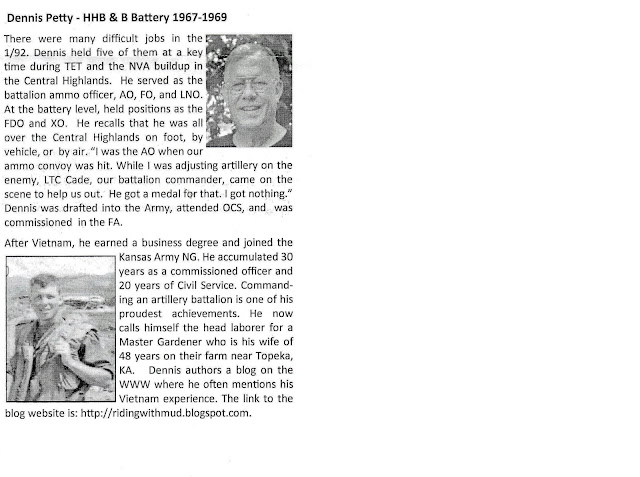