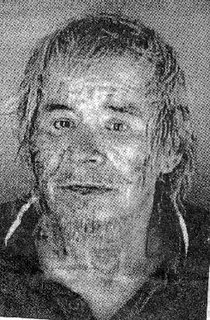 If until 2004, you ran into the most arrested man in Topeka, his breath smeled good. He was known for drinking mint mouthwash from the dollar store. At 58 his liver just gave out. He spent 908 days in the Shawnee County Jail at a cost of $63,905 to the citizens of this city. the next five on this list are:

Somewhere in our legal system, we just forgot that sometimes people do stupid things and just need locked up. In the 1960's, he would have been committed to the Topeka State Hospital and perhaps kept there sober. Where did we go wrong? I'll bet there is a contingent of eople out there that say so what?

OK, so what. This gus isn't any hiugher on the list of people who do dumb things than a couple that went to a party in the Highland Crest park on Friday night and forgot to take their 2 year old boy home with them. They left him in the park.

My niece, Rebecca DeMauro recommentded a book called "Marley and Me" by John Grogan. It is a cute story about "life and love with the world's worse dog". I bought it yesterday and I laughed my butt off. Combine the energy of a yellow lab with an absolute fear of storms and you can imagine a story about a dog that Woodhouse said in chapter 24 of her book, "Some dogs just need put down". This animal lived in Florida where thunderstorms are a daily occurrence at 4 PM. As soon as Barbara finishes the book, I will send it to her sister Shirley who is right now trying to train two puppies as Guard dogs near Barstow, California.

That's all Folks. Write if you get work!