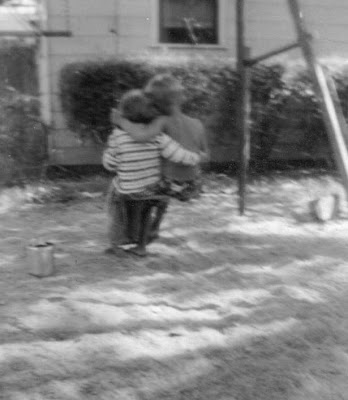 SUMMER DAYS IN THE EARLY 50'S
NO SHIRTS, NO SHOES, BUT SWINGS TO SHARE
For a week or so, we have been having temperatures well up in the mid 90's and it never really cools down overnight. This morning I went out to take out the trash and there were great big raindrops falling and enough wind that I kinda wanted a light jacket. Now it is in that stage where I don't know what to do, stay inside or get the heck out there anyway.

For a lot of my life, I have been the kind of guy that was outside in most all kinds of weather. I had a paper route in Junior High and then 31 years of the Military. Most notably of that time, was the year I spent mostly outside in Vietnam. Perhaps some of the most memorable times outside should be noted here.

The paper route in 1961 was the year of the Centennial in Kansas. I remember that fact because the paper from that celebration was almost 400 pages and it took a truck to carry all the bundles to me. The Centennial was in January and the next month we had a record snow. I think we had about 10 inches on the ground and it snowed 27 more inches in a 24 hour period. I was walking my route and crossed over a driveway where I always did. I guess I missed the actual driveway and fell in a five foot ditch that was full of snow. I remember feeling like it was so nice and I could go to sleep if I tried. The wind was so cold that the snow out of the wind almost felt warm. I do remember that I had to fight my way clear down the ditch to a place where I could get out. As a kid we would play outside all day and it was very common to have our blue jeans frozen like a stove pipe after sledding down the big hill.

In Vietnam, there was just a few times when I was on a fire base just west of Kontum that we would wake up completely in the sun and the valley surrounding us would be cloud covered. We were above the clouds and it was a respite from the wet and damp and cool. I remember that we would take a powder Canister and fill it with water and a pound of coffee. We would take turns throwing loose powder from the charges in the powder pit and throwing it near the canister. After a few minuted of that, we would then get a canteen cup of coffee and just sit there in the glorious sun. After an hour of so, the clouds would start lifting and we would spend the rest of the day either in the clouds or just below them in the rain. After three months of rain, a chance to get out in the sun was like a day at the beach. Our spirits would soar.

Growing up, there were few places where there was air conditioning. From the time we got up to the time we went to bed we were mostly outside and wearing as little as possible was the rule. I fully understand the natives in the jungle who let their kids run around naked. I remember that I had a lot of loose cotton shorts and more than once an older kid would tell me that my junk was showing. It was pretty much no shoes, no shirt and no AC back then.

No matter how hot it got, there was always a group of kids up for a ball game. There wasn't always a ball, but there was always enough kids. I remember that the bandy's lived down the street and they sponsored a ball team. Mrs bandy always had a few brand new balls in the freezer. I think that was the only thing she could lock so that was where the balls were stored. We would play ball until someone would knock the cover off the old ball. We would go around the neighborhood picking up pop bottles until we had a dollar and Mrs. Bandy would sell us one of those brand new frozen base balls. There were never enough ball gloves for everyone to have one. If you were in the field, you would leave your glove there for someone else to use it when your team was at bat. If we were lucky, we could count on Mom to give us a dime and we would trudge up to Womack's grocery for cold bottle of pop. We always drank it there because of the deposit if you took the bottle home. I can remember the first 16 oz bottle of pop. It tasted like someone had watered down a Pepsi but may could 16 ounces of pop would cool you down and make your belly be full for an hour.

One summer, I mowed lawns as much as I could. Ond day I really hit the jackpot and I think i had a couple of dollars. The fore mentioned Grocery store up the street had a truck of those big green Black Diamonds water melons delivered and she had one big refrigerated display case full of them. I remember buying one and taking it home. I sat on the back porch and ate that sucker by myself. The cold melon, the warm concrete porch and me. Pure heaven.

Well, I better move on with life or I'll never get anything done. Perhaps I need a water melon day now and then.