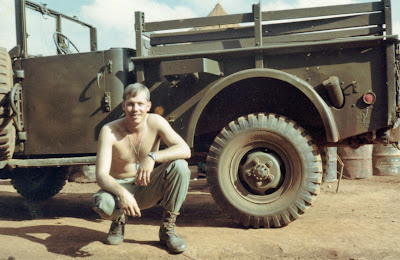 The other day I was surfing through the channels on the dish and ran into the Forrest Gump Story. They were talking about all the kinds of rain he saw there. If you ever need a primer about the Monsoon season watch that part of the movie. It is funny and accurate.

Here's how I was introduced to the rains. We were in a convoy coming back from Dakto to Pleiku and the engineers hadn't got the entire route paved in one lane so we were making tracks down the dust covered road and the dust from the truck ahead was boiling so bad that we were spread out a little more than I was comfortable with. All of a sudden, the gray skies started to leak and the dust from the trucks was plastered to us as it rolled out and got mixed with the dust on the trucks, the windshields, our eyes, out clothes and it wasn't raining hard enough to wash any of it away. I just kept coating us with more brown dust until the front sides of everything looked like they were dipped in chocolate. It was the most miserable trip I ever took and I think I can still wash some of that dust/mud out of my ears.

That went on for about four months and everywhere we went it was slippery and muddy and wet. I spent a couple of weeks out with a unit during that time and moving up and down hills was almost like watching clowns in the circus. Two steps up, three steps back down and if you were lucky you could catch something to break you fall and not the guy behind you's leg. It was hard to explain why it took us so long to get from point A to Point B unless you had been out there.

Then one day, the sauna doors opened when the sun came back out and tried to dry all that rain away in the shortest time possible. It gave stink a new definition as our things tried to dry out in 100% humidity and 100 degree temps. I will promise you that I thought Vietnam stunk prior to the rainy season but for a couple of weeks after it stopped the smell was double. Most of that was not just the GI's but everything that could rot or decompose.

Just so you will know, the weather here feels like that for about a week now.