What will I do? 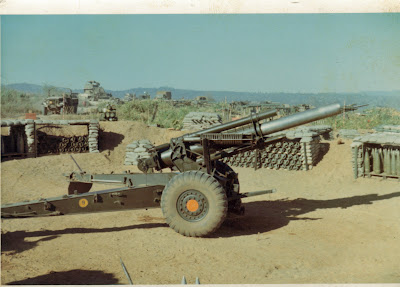 One of my favorite Barbershop Songs starts with the line "What will I do, when you go away?" I think every soldier asks himself that question when he is on guard duty in some god forsaken place. Not what will he do when he loses his girl friend, but what will he do when he is faced with a high probability to meet and greet the enemy face to face. Every reaction from pissing his pants to getting up and getting his ass shot off are in the realm of possibilities. I assure you that in the reality of such an event,you will not lollygag thinking about what you will do, you will just react and then later on shake as you weigh the possibilities, Or not. Life in combat is binary, either you are alive or your are dead. There are a few that get the "Million Dollar Wound" but those guys just disappear into the medical system and you seldom hear from them.

I can't really tell you what you will do, but I can share a couple of examples of what I did. In the central Highlands after TET of 1968, there were not a lot of forces the VC or NVA had that were able to throw up a great number of soldiers to do anything that looked like face to face attacks. The engagement of choice for that time and place was mortars and rockets. Let me share the first and last experiences I had.

The first round from a mortar wakes you up with a sound like someone clapped their hand on the hard plastic part of a vacuum cleaner. It is a "thunk" kind of sound that wakes you up in an instant. It was about 2:45 in the morning and I had just finished digging our sleeping position and rolled over in a sleep that I thought could never be interrupted. Wrong... Damn if that thunk wasn't followed with another one and soon the impact of the first round was heard and then following rapid succession was the Thunk and explosions so mixed up that I had no idea what to do so I just stayed hidden under my helmet and flack vest. I was an unassigned Forward Observer and waiting for an assignment. I had no responsibility with the guns or the Fire Direction center. The sole area of responsibility was the three man Team. If you have read any of my writings about Vietnam, you know that my Radio telephone Operator (RTO) was newly assigned to me from one of the gun sections. It is my sad duty to tell you that the third and nearly the last mortar rounds wounded him and then ended his life. None of those occurrences could have been changed. Again I tell you in the most common language of a grunt, "It's Binary man, either you are alive or you are not."

I swear I crawled under that helmet and blanket of Kevlar thinking I was as safe as in my mother's arms. A mortar round hit one of the gun trucks parked right by my position and I decided that I did not feel safe there. Pretty soon, I could not stand the idea that my friends were dying and I was there in safety. One of the howitzers had a pretty direct line of fire to the mortar position and they opened up on the mortar and finally either I lost my hearing or it just got quiet.There were about 37 Mortar round landed in our position and we got off 4 or 5 rounds in his position. I ran out into the gun positions and looked for the Battery Commander or the XO. Neither were standing when the barrage stopped. They were in the middle of the impacting mortars and were moved to the side of the battery to be treated by the Medics. They were both med evaced with wounds that required treatment at a hospital. neither were wounded fatally. I spent a few seconds trying to figure out what to do and then just moved around the battery trying to get the people back on the guns and ready to fire should anyone decide to follow up the mortar attack with more of the same or a ground attack. It was almost two weeks to the day we had been in Vietnam and no one had any idea what the hell to expect.

I was running on adrenalin and so jumpy that I had a thousand thoughts running through my mind. I tried my best to not let it show in my voice but who knows what Donald Duck sounds came out for a while. Right there on the side of the battery was a jeep trailer that had been full of gas cans burning that gave the whole damn place an eerie glow like a camp out. Not enough light to see what exactly was happening but enough to provide silhouettes if there had been a ground attack. "Someone get the fire extinguishers from the trucks and put out that damn fire." Yes, I know you have wounded but unless we want more, put out the fire.

Out of the darkness came some Major I had never met. He wanted to know how many wounded and killed I had. I simply told him that I had no idea in hell and counting was not something I would do until I made sure the battery was safe and secure. "Put out that Damned Fire Lieutenant" "Which one of you people are drivers on your gun truck? get a fire extinguisher and put out that damned fire."

My RTO had been wounded by a mortar round and ran over and got under that damned jeep trailer. he was thankfully dead by the time his body was incinerated. It wasn't until much later that I recognized him. His body was removed from under the the jeep trailer and somewhere near daylight I got a good look at him. Shit, Sal laid there and I didn't even recognize him. We identified him be elimination at first and then I recognized his nose. The rest was not in any shape to tell what or who it was. He didn't have any dog tags on and anything in his uniform was melted into the ground there where that trailer has burned.

I spent the next three days without sleep putting the battery back together and moving it to a new position. When we finally got a new officer assigned, I checked out of the net and slept for about 14 hours.

The last time I was fired on in Vietnam, was right after I got back from my R&R and I was so short that I counted the days until I was to go home on a short timer stick with 30 notches for days. I could rappel out of my low quarters I was so short. Most people in my unit would have been rotated to base camp for some light duty but my replacement was some damned National Guardsman that needed to attend the Fire Direction School and I couldn't be relieved until he finished his training. It turned out that the guy that replaced me was Steve Livingston and he and I were good friends back in the real world.

I was sitting in a great big bunker that had been built around a downed tree and was about as good a bunker as you could get. I'm sure there were some concrete roofed bunkers near base camps but in the middle of nowhere and on top of that mountain it was as good as it got. I had just toured the gun positions and was nearing the end of the day. I was tired and had just slipped of my helmet and flak jacket. Boom! it was so close it shook the bunker and dust slipped out of the ceiling. The Chief of Smoke came in the door like he had been shot. He couldn't find his helmet, his flak jacket or his rifle. Normally one of us would stay inside and one would be out in the case of a rocket, mortar or Recoilless Rifle attack. I just put my junk on and told him to get on the damned phone and stay there.

Without thinking, I just went out in the daylight to see what I could do to stop that bastard from shooting down my people. The nearest gun right there on the perimeter was swinging around to shoot back. I helped them aim the gun and we fired just as he fired his second round. Shit oh dear, he was shooting right where I was standing and I barely had time to get behind a tree stump when the para pit in front of us just exploded. The gun crew had another round right there and ready to fire so fast that we fired our second round before he fired his third round. Between each round I would looked down the tube and re aim at the far hillside. Shit here comes a round and damned if it didn't blow a wooden stack of pallets all to hell and almost to a man the gun crew was wounded by either shrapnel or wood splinters.

The crew had fired all the rounds right there behind the gun and I grabbed two of the 155 projectiles under my arms and ran to the gun on my knees. Did it hurt? Hell if I know. By that time there was enough adrenalin in my system that I could have run a 100 yard dash on broken glass while on my knees. Someone found a box of fuzes and we fired those rounds at the far hill. Then, nothing happened for what seemed like eternity.

If you had been there in that gun pit, you would have no hearing left. I looked around and there was nothing of the sandbags we had built around us. The entire place looked like an F5 tornado had come in and torn it down. Most of the gun crew was there standing looking for something to shoot at and leaking blood in numerous places. All i could do was to shake and wonder what the hell did I do that for? Damned good way to get killed, I didn't and I hoped our enemy did. The Arvin unit that was a part of the perimeter defense sent a team out and they said there were no bodies but numerous blood trails leading away from the firing position.

So, I can tell you that in these two instances i acted completely differently and lived to tell about both. By the way, that tree stump was a very small tree stump about 2 inches in diameter. I had hid right out in the open and didn't realize it.

PS. The question I ask myself now days is what do I want out of life besides myself? I guess I'd better get busy and do it cause at 63 there aren't many more decades to get it done.