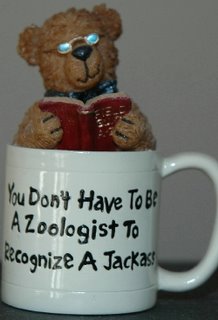 I just love weekends now that I'm working part time. They were just another day (or two) in the past but now they are adjustment days. Man do I need an adjustment after spending my week in the DB room. Friday, one of the little guys that is way too round for his height, (I prefer to say he is under tall not overweight) said I had a fat belly. I told him that I had spent my entire life feeding that belly and I was proud of it. When he gets old, he too can strut around looking like the beginning of his second trimester. None of that probably made sense to him and the fact that that I didn't return the charge that he too was fat probably confused him.
I am being careful not to use names to protect the guilty.
One of the other things that hit me funny this week was the fact that two of the little guys thought the use of the word Butt was funny. I told them it was inappropriate but they said it was OK with the teacher. On Wednesday I asked Mr D what was an appropriate thing to be saying and of course their word was on the verbotten list. One of them said he only said it because the other one liked it. Wrong is wrong and I'll police things pretty strict from now on. One little guy thought he could listen to little Bow Wow's rap songs until I asked about the language. No Go, on that one also.
Dave's car had a spell of not starting this week. I charged the battery but it didn't seem to help. I cleaned the terminals (and tightened them) and left it on the charger last night. If it doesn't work this AM I'll put a new battery in it. Probably will double the value of his car. Oh well, can't think of a nicer guy to spend my money on. Better get started on my day.
PS Beck, I posted the photo this morning on my machine. No Problem
Dennis, aka MUD
Posted by MUD at 9:31 AM