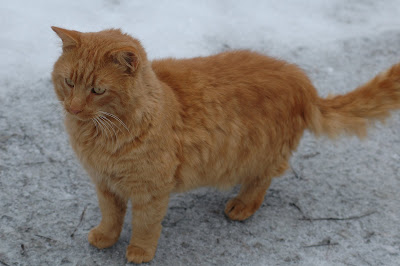 With the ice storm and the new snow, Tiger has been missing for about a week now. My bet is that as smart and old, he is just staying put in one of the neighbor's barn somewhere. I'll bet he is living in the lap of luxury being fed by some concerned neighbor or in a barn with an ample supply of rodents. I'll bet he is high enough up the food chain that his wiles have taken care of him.
Speaking of rodents, I noticed that the dog food sack had a hole chewed in it about six inches off the floor. The hole was about an inch in diameter and I suspected a mouse. I generally plan a defense in depth in the garage against marauding mice but have been neglectful of my duties. I set five or six mouse traps along a ledge in the garage. They are well baited with peanut butter and they have never failed to draw interest. They either get licked clean or catch one of the stupid mice. I put them perpendicular to the wall and the mice try to put their noses in the little hole to work more peanut butter out. Then if they back up to avoid that trap they run into another. Had one mouse this week caught in two traps at the same time. I also saw the telltale dropping of a pack rat at Dave's when I went into one of the shed's. I need to reset a trap there as it has been a month or two since I have actively tried to catch one of the rats there. I went about a week that I caught a rat daily and they were scarce for the next couple of weeks. I'm pretty sure that I have mouse proofed his house but the outlying shed is another matter.
With all the ice and snow, I have not gone over to Dave's old house to finish the moving. It is too slick to drive the truck and pulling the trailer is out of the question. I guess I'll get a chance early this week when the temps warm up into the 40s. I think I have about one more load to get and then I'll start on fixing up the joint. I know it needs outside paint and that won't be possible for a few more months on the outside. The good news is that I have had some pretty good renters so I had enough saved to pay all the taxes. Just for a reference, half of my taxes was over $3,000.
I haven't loaded Turbo Taxes yet to see what effect our low withholding on our income taxes will cause in the way of an April 15 liability. The real test will come next year when there won't be half of a year withholding from Barb. I haven't found a program that can accurately predict
our taxes because of the source. Federal taxes don't apply to State retirement sources and State taxes don't apply to Federal retirements. We have both and I have a probably misdirected hope that they will almost offset. The real proof (or truth) will be when I get to sit down with the 1099s and W-2's. The good news is that either way I probably will have enough to pay taxes and penalties. The second half of the taxes are due in May and that is pretty close on the heels of the April 15th date. Might pay to figure out the taxes early and not let it be a surprise in April and May.
I know, piss and moan, piss and moan... I should be the happiest guy in the world to be in the shape we are in but I still have some reservations about the shape of our economy and/or the depth of our investments. The one thing I want to do this next year is to do some solar heating work. I know that both this house and Dave's new digs would benefit from added insulation and some solar collectors. Perhaps Kenny will be available to come down and put his torch and abilities to the building. We'll see. I have been reading Mother Earth News and getting ideas.
MUD
Posted by MUD at 10:28 AM