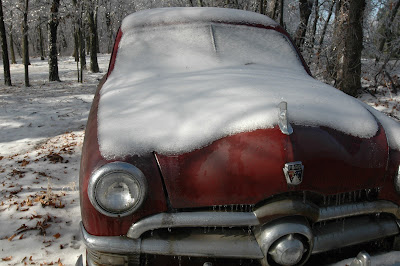 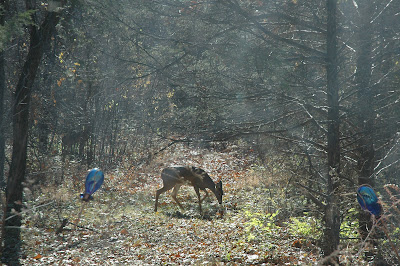 Well Sports Fans, Its another beautiful snowy day here at Rabbit Run. The weather man is predicting 3 to 7 inches of new white stuff and we have at least two of those inches on the ground right now. It was almost sleeting when I took the trash cans out to the court for the trash truck. It was a real fine hard snow then. Now it is big fluffy flakes and steadily falling in the lee of the house. I am downstairs on the computer and it is on the south side. On the north side of the house the wind is blowing about 10 to 15 MPH.
The grape vine tells me that my brother's electricity in Oklahoma has been restored and the queen is on her way home. My brother had her ensconced in a nursing home yesterday so she could get a chance to have a bath and attend their Christmas party. Good on both counts.
When I talked to Carol, she said that the Petty Family Christmas party will be held next Saturday at her house in Lawrence. Looks like Mom and Rick won't be there in person but will be there in spirit. We will all partake in our favorite soups. Dave's wife and I are going to collaborate on a sea food gumbo. I will gumbo and she will make rice in her rice cooker. I have chicken, shrimp, crab, Cajun sausage, okra and smoked sausage to go in the soup. I'll let you know next week what it is like.
Made a run to Kansas City to visit Chevy Duty (Old Truck Part CO) only to find it replaced with Classic Parts? I guess Chevrolet threatened them with a law suit and they changed their name. Same place, same parts, different name. I spent about $999 dollars on a door and a fender and misc parts to fix the truck after the wreck. So far I have spent about a third of the settlement on parts so we'll see what it takes to get her all up and running. I wonder if I have enough left over to fix up that 53 Chevy trailer I want?
Yesterday I had a discussion with a couple of "non-blogger" about why they do not have a blog. One was too busy to bother and the other felt it was too revealing and she was too private a person to feel comfortable exposing her life in a blog. I have relatives that also don't want their names and photos posted in this blog because they are trying to avoid public exposure. I wonder why I don't feel the least bit bad about pictures and information I put on this blog? Really? No! I am like a short order cook and sling the hash out there and you can either read it or not. Barbara seems to think it is because I can make stuff so fast that I don't have time to consider the ramifications of what I say. Little does she know that I can't type that fast. In fact, there are times that I am thinking of a word and type that word in place of the one I WAS WORKING ON. From time to time I hit the Caps Lock key in the middle of a sentence and find half of a sentence in Caps. Sometimes I correct it and sometimes I don't. Most of the time I bang it out there and then run the spell checker to see what I screwed up.
Barbara took my camera out to take some pictures of the snow. If there is a picture at the top of this blog it is all her work. She didn't like my picture of the snow through the window. Oh well, we'll see. Slow down and smell the snow. Our outside cat, Tiger, has been off the place for the last three days. Must have a girl friend or some nice family that took him in until the snow clears. Smart Cat!
MUD
Posted by MUD at 10:45 AM