Please forgive me if I use any of Barb's pictures for Bryce as my camera had an equipment failure right after the evening shoot at Bryce. I think the loose nut behind the lens caused the card to be jammed in and a pin bent for the CF card. We went to Sunset point and the view is stunning. The features are called HooDoos and look like someone had stacked beautiful rocks to make an endless collection of things that your eye can make up things when you look at them. After the looking up at Zion, it was kind of strange to be looking down. This is really the edge of a Plateau not a canyon. 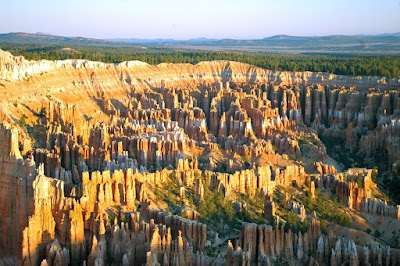 Someone named this feature "Grottos" as it kind of does look like caves in the side of the hill. I'm pretty sure that it would be almost impossible to live in any of them. Hell, it would be tough for a scared cat like me to even repel down to the openings any more. I will just try to remember how interesting they were. 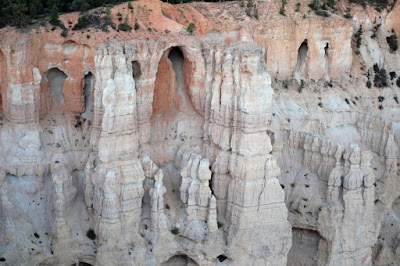 Yesterday I went downtown to have a new windshield put in the FORD. It was kind of fun to watch the process. I found out that they wanted me to let it set for an hour after they finished to let the adhesive set. I walked over to the camera shop and talked to the camera repairman. He had no way to straighten out the bent pin.
On the way home I stopped and bought some tools at harbor freight and spent the next half hour trying different combinations of ways to get the one bent pin straight. I think I have it OK for now. I am trying to decide if I want to buy a used D-70 and use parts to try to fix my camera or try to deal Wolfe's out of the D-80 they took in as a trade. There is always E-Bay with a bunch of cameras. What ever I do, I will probably stay with NIKON as we have such a great lens collection. Even if Barb has the wrong lens when she see's something neat.
OH well, Mowing calls so I had better get the mowers sharp and running.
MUD
Posted by MUD at 9:27 AM