On The Road Again

Million of years ago, lava flowed out of rifts in Central Idaho as North America caused plates to be subducted and all that rock just had to come out somewhere. It covered an area 20X60 miles with a layer of lava. It was not a volcano, just molten rock that escaped and covered what is now Craters of the Moon national park with layers of lava up to 6 feet deep. On the surface much of the rock has weathered down into what is almost a black sand with a few bigger rocks. 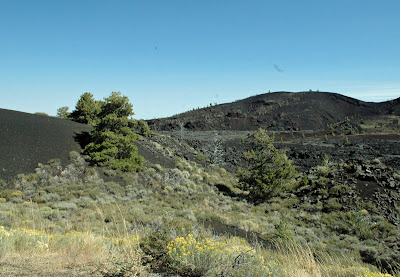 In the cracks and crevices, the ubiquitous Sage Brush is growing and now is the season when it blossoms. The yellow blossoms just pops against the black rocks. 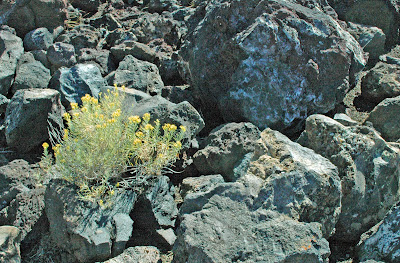 A little south of the park, there was an overlook with a big sage brush and I just couldn't help but snap a picture of it. 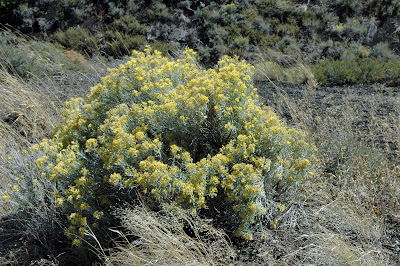 We spent a few days working on the floor at Mom's and hopefully she thinks the hassle is worth the results. I hope that Mom knows that my brother-in-law did the lion's share of the work and I played helper to hand him tools and fetch things. The even great news is that in the end Ken is still speaking to me. I know that as long as Grissy welcomes me, Ken will to.
We are spending the night in Jackpot, Nevada and will wind up in St George, Utah to start our five day photography workshop. I hope to have more pictures then.
MUD
Posted by MUD at 10:08 PM