Views From the Road

Did I mention that I am a proud resident of Kansas? I walked past this sign and just couldn't pass up a chance to share the details of my State with you 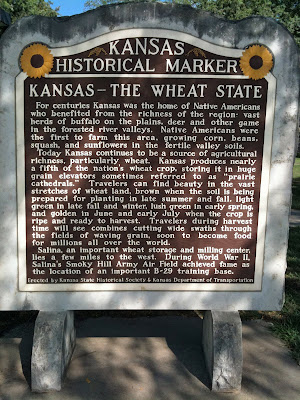 In Topeka a lot of people make a pretty big deal out of Junteenth. I'm not sure exactly what it is but every time someone mentions it, it gets tied to the little town of Nicodemus in Western Kansas. For 30 years in Topeka I have been told about Nicodemus and never had a chance to go near it. Well, these pictures show you that even a blind pig can find an acorn now and then. 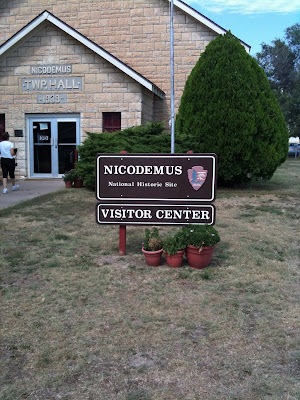 The Museum host shared with us that in the 1860's and 1870's many black people were lured out to Kansas with the promise of free land. By 1870, 400 former slaves settled in Nicodemus and continued to live there until like a lot of small towns, the town started to fade away. It was one of the few all black cities in Kansas. 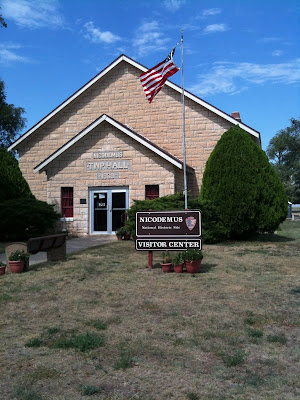 In 1955, they had to close the school and many people just moved away. Today out of the 40 people in the town, 25 are decendents of the origional settlers. She said the average age of the members is 76. The Hostess and I had a long talk about how many people didn't know that a lot of the cowboys that brought cows up to Abilene and Dodge City were black and many hispanic. We laughed that the Movies and TV would lead you to believe it was a lilly white world. She talked about that there were a lot of blacks in Kansas prior to the Civil war that were free men. We also talked about the fact that past Kansas City, the Civil War was not a real factor in the lives out west. She said there was a battle in New Mexico and one near Kansas City but many people farmed out west and were just left alone.
Hope you are all well. After about 10 hours behind the wheel, I'm ready for a shower and sleep. Oh, these pictures are from my I-Phone.
MUD
Posted by MUD at 9:21 PM