Our paper this morning had a cartoon on the opinion page and it showed Social Security and the Trickle Down theory with Uncle Sam asking what a Ponzi Scheme was.  I don't remember when it happened, but a guy named Ponzi invented a swindle scheme where he promised investors a large rate of return on an investment.  He paid the early investors out of the income from the later investors (Keeping a large share for himself) until the whole thing fell apart.   I'm pretty sure the name Ponzi and the saying, "If it looks too good to be true, it probably is" were both named after him.  I am not sure what I paid into over my lifetime, but I am pretty sure that I am one of the few that will not get my money back.  Even though I have paid my 40 quarters into the system, they have greatly reduced my payments because of my Military retirement.  Oh well, So far so good on everything else. 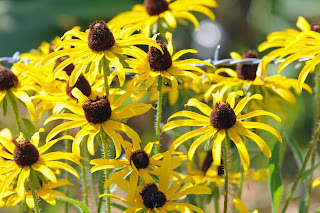 Barb and I planted a bunch of wildflower seeds in our prairie yesterday and right on time Mother nature is watering them.  It is nice to watch the  grass pasture turn into a wildflower garden.  The only thing I hate is the ragweed growing there.  I guess I need to spend a little time next spring doing my best to eradicate it.  There are a couple of places that it has a good head start and we all are allergic to it.

I enjoyed the first half of the KU football game yesterday against Georgia Tech.  The Yellow jacket coach said at halftime that he hopes his team can continue to perform and his defense needs to step up.  That's what happened and the second half was not fun to watch.
Posted by MUD at 10:12 AM