Sleeping on the ground

For almost a year, I spent the majority of the nights sleeping where we stopped for the day. In 1968, I was in Vietnam. I spent almost all fo my time either as a Forward Observer with an infantry Company or with the gun battery forward deployed on a mountain top. That meant that comfort was something that was pretty darned important.  I can't tell you the value of a darned good air mattress.  The ones made for the Military were basically rubber tubes that you inflated by blowing them up.  Depending on how many punctures they had, they stayed inflated for a short period of time.  If you were lucky they would stay inflated for a couple of hours.  It was fairly easy to fall asleep  and stay that way unless the ground was rocky.  Most of the time the ground was soft and muddy  and you put your poncho under the mattress.  If you really couldn't sleep, you would blow it up again and go back to sleep. 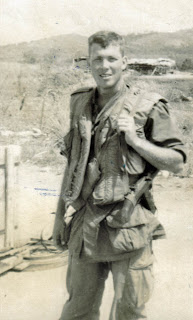 I can't tell you the number of times I would swing by a supply room and trade a really bad air mattress for one that was"Good."  On one trip to the supply room I made a decision that I would demand a new bag still in the plastic bag.  (That and a fifth of good whiskey would get you one)  The first night that damned mattress just went whoosh and whole end just blew out the seam.  Back the next morning to the supply room and I got a replacement.  I took it and went back to the field.  That mattress was solid gold.  It never leaked even a puff of air.  I was in hog heaven for a short time.

I finally came up on a time for an R&R and as i was leaving, "Twiggy" asked me if he could use that great mattress while I was on leave.  I made him swear to take care of it and left thinking good things about my meeting with the wife.

While I was on R&R, the unit moved from just outside Kontum to way the hell out to the west on the top of a mountain.  It seems that we also got a new Battery Commander that for obvious reasons everyone called Fat Albert.  This guy was big and fat all over.  I arrived back and went over to the FDC to get my air mattress back.  Twiggy was almost in tears when he saw me. He asked me to come outside (To keep the blood off the chart tables if I did rip off his head.   He stopped hy the small sand bag hooch he slept in and brought out the mattress.  It was flat and right in the middle was a size 12 boot print.

Twiggy said that he was taking the air mattress outside to give it some sum after a rain and a mortar round fell somewhere on the fire base.  Fat Albert was about 25 feet from the FDC bunker door just as Twiggy was coming out.  Fat Albert knocked Twiggy down and stepped right in the middle of him and my mattress. The mattress exploded and Albert fell down thinking that another mortar round had hit there by the door.

I think the story softened the blow of losing a good mattress.  As it turned out, I spent the rest of my time in Vietnam in a location I could sleep on a cot so the flat mattress was not as big a deal.  I never did hear what happened to the unit after I left.  When I left Vietnam, the supply had lost my footlocker so the only thing I had was a small suitcase I brought back from hawaii and the uniform I was wearing.  I had to borrow some kacki's to go home in.