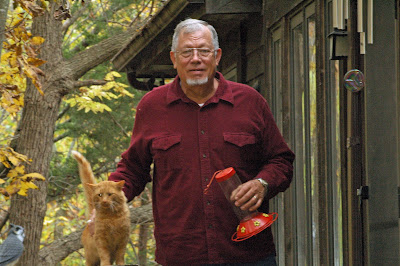 Changes are a way of life as we go through life. Most of the time they are so gradual that you don't even realize you have made most of them. However, once in a while the changes are so numerous that you have to stop and take stock of just where you are going. At least you will take notice so long as you can remember the way we were.

• I find it frustrating when I pick up a book at the library and get a bunch of pages into the book to realize I have read it. With Barb reading two or three books a week that shouldn't be a problem but heck I read one or two a month.
• Barb and I have started to use those cloth bags when we shop but often forget to take them in the store. You should see the looks we get from the cashiers at Wal*Mart when we tell them to just put the stuff back in the cart. Oh, we do pay for it and take it, but we put it in the bags that are in the trunk of the car. For the first time yesterday the door greeter stopped us and looked at the receipt.
• I have been a non-drinker for almost 20 years. I stopped when I attended a class in Lawrence in 1990. I think I had stopped smoking prior to that. It was my goal to have one cigar near my birthday each year. Forgot this year and really didn't miss it. A couple of weeks ago I was in a hotel and they had a manager's reception one evening. I went there expecting an O'Doul's and they didn't have anything non alcoholic. They did have a something that has only 64 calories so I tried that. It was little more than beer flavored water. Sure wouldn't waste good money on that. I am well beyond the point where I need to drink so one beer flavored water doesn't worry me about falling off the wagon.
• For some reason I have almost stopped going to movies. The last on I saw was the Batman movie last year. It was the darkest damn movie I had ever seen. On my way out of the theater I realized that I still had my clip-on sunglasses over my regular glasses. Duh Dennis. I'll bet it was still too loud and too dark. If a partially deaf person thinks it is too loud, how do the normal people stand it?
• One of the most prevalent personal thing we see today is cell phones. I had a pager once and hated it. I worked second shift and one morning the Boss paged us for an early morning meeting. When asked where I was and why I didn't answer the page, I calmly answered that The damn thing was in the sock drawer because I worked until midnight and refused to wear it on my underwear. People would page you and expect you to stop somewhere and call them back. I guess that displeasure carried over to the idea of a cell phone. There are times I just don't want to be found. 'Cides, the pager kept falling off my underwear in bed.
• There was a time in my life that I rented DVD's. The source is drying up and I refuse to pay a monthly fee to Netflix. Just the other day I cleaned out my old day runner and found the Blockbuster card for the store that closed. For a while our grocery store had a video section but they closed it. Heck, I don't even have any of the premium channels on my TV. I would watch Dexter but not sure after seeing the HBO lineup on our trip, if it is worth the money.

Well enough of this crap, on with the real life. It is overcast and about 60 degrees outside. It will cool down all day and the real high will be only 39 or 40. (with rain most of the day)
MUD
Posted by MUD at 9:42 AM