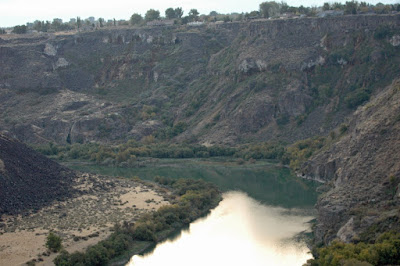 I started the day a little early today when the wife was working on the picture frame to a new picture she purchased. It is a print of a photograph and has a very abstract look to it like someone had driven the colors to a vibrant hue with Photoshop. At the time in our lives where we can take a nap if desired when we wake up is no big deal. I probably had to pee any way. (yes, I know that is TMI but the truth)

I fetched the paper in and bribed the cat back out of the garage with food. I made a pot of coffee and settled in to read the morning brag-rag. My rant this morning started with quotes from Jay Leno and congress. If the CEO's can be made to take a 90% cut in pay, can we now use that limit on congress? (paraphrased) The Seniors won't get a raise in Social Security this year. Obama is proposing a $250.00 bonus to seniors. To add insult to injury one columnist indicated that the kids need the money more than the seniors, and another person wrote Dear Abby that they were concerned about their parents becoming a burden to them because of their spending.

Where to start. First let me say that since 1971, General Motors has made cars that people didn't want or buy. There is a need for a fleet's worth of cop cars out there and not one semi-large rear wheeled car for the interstate is out there in the GM fleet. The only rear wheeled car they make is the corvette and with premium gas at almost $3.00 a gallon who needs to be able to drive 140 miles per hour, at $55,000 per. When GMy finally went broke, the unfortunate thing is that the Government took my ownership paper (stock) and made it worthless. If they would have just let GM finally die, the liquidation money from each share would have been at least $100.00 by my count. Asset value/number of shares. Oh well....

On the issue of Congress, does it surprise you that many politicians have gone in broke and came out millionaires? Hell, Bob Dole even got a divorce during that time and managed to come out with a small fortune. Let one of us do that and she will get the gold mine and we'll get the shaft. Look at the Clinton's. My God he was the Governor of Arkansas and broke. Now they are millionaires? Over and over this happens.

I am not sure of the best way to get the stimulus into the economy. The problem as I see it is do they really think they can buy me for a measly $250.00 ? Crap, I would need at least $500 just to get my attention. Especially when I feel that they are about to dick up the health care system and cost me a hell of a lot more than that. I will feel a lot more secure when Government finds a way to help us heat and cool our houses cheaper than the $50,000 per household like the solar panels in Florida. For a couple of hundred dollars, we can build solar panels for heat and I'll bet there are quite a few houses out there that would benefit from insulation. Not to mention the number of people that could go to work if upgrading insulation was a credit on the taxes. Yes, I hated the cash for clunkers because my clunkers didn't qualify. I had to buy a car for my cash and without the benefit of a clunker allowance.


On the issue of senior care, I have worked hard my entire life and it should be of no concern what will be left of my estate when I die to the next generation. 'Cides, I won't out last Barb and I will leave her enough to make it into the ground. I'll bet she doesn't spend her last dollar on her last day. Our kids were supported our entire lives and if I want a new computer or camera what the hell, I'll buy it.

I guess being awakened by pounding from upstairs has my panties all in a bunch. Instead of a rant I probably should have gone back to sleep and napped my way into the day. Barb did make biscuits and ham. I guess I am a little pissed that KU started out so well and and hit the skids in football. Crap, K-State is in the lead of the North Division of the big XII and we aren't. How can Oklahoma let KU run up over 400 yards of offense and not lose three games to date. KU's new defense couldn't stop the Sooners scoring. Oh well...