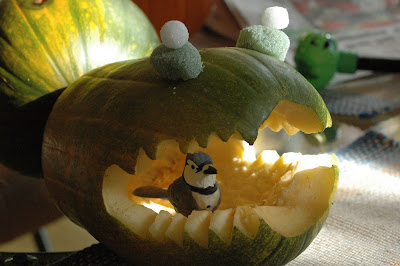 Martha Jr and Barb Jr. went to the pumpkin patch and brought home several green pumpkins. One of which became a snake that is eating a blue Jay. That stupid bird has a motion sensor and every time you walk by it it makes the sound of a Blue Jay. This morning I fetched the paper, made a pot of coffee and as I sat down, I noticed the pumpkin had collapsed around the bird and was beginning to smell. I removed the bird from its mouth and removed the pumpkin from the house. I can stand cute but I can't stand rotten.

Yesterday evening we had a birthday dinner with the kids at the Salty Iguana in Lawrence. I ordered an appetiser and ruined what would have been an otherwise excellent dinner. They have a three taco plate with beans and rice that is a man sized meal and I could not finish by a long shot. Our waitress was an interesting girl. She looked like she had slept in her clothes and didn't even comb her hair before coming to work. She took 6 people's order and didn't write down a thing. Near as I could tell, everyone got what they ordered and the things ordered on the side were on the side. She kept our drinks full and in the end was tipped well for her efforts. (OK, she had kind of a red haired Irish thing going on and was cute as a button)

We returned home to eat Birthday cake with Dave. Barb taught cake decorating at Michael's for a while and made a white shirt cake to look like the geek squad uniform down to the name tag. On the tie she wrote Geeks Rule in white letters. The kids loved it. Their friend Mel even came over for cake and ice cream. Barb's step mother and grandmother came to Lawrence to eat with us but skipped the cake.

Today is predicted to get into the 60's here in the heartland. I am going to take the leaf blower out and blow the leaves off the deck and with luck take the bikes to the lake for a ride. Exciting times for a retiree when I get to do two things in the same day and neither one includes a trip to Wal*Mart. have fun out there.