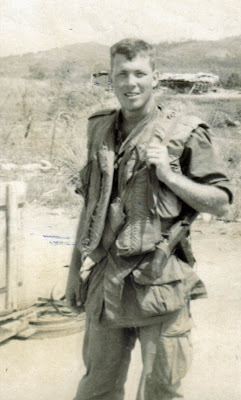 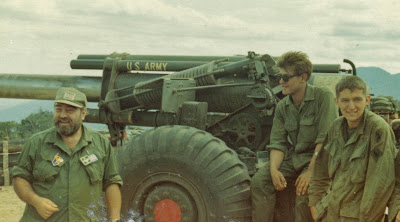 Every once in a while I get the urge to write another War Story. if you are offended by a little profanity, it might pay you to go away for a week or so. If not, gather in your guns and listen up:

Guns, Where are my Bloody Guns?
My tour in Vietnam was one endless cycle of changing assignments. I was a Forward Observer when we went over as a battalion. The first night in the field, I became the only officer left in the unit after a mortar attack wounded the Commander and the XO. After a meeting engagement with the Group Commander I was soon infused over to another unit over in Pleiku and in a different Artillery Group. I was officially assigned as the Service Battery Ammunition Officer but was the loaner FO when anyone needed one for a while. Even when I was not loaned out, I spent my days flying as convoy cover as we tried to resupply the Ammo Dump in Dak to. It had been blown up during TET and we hauled convoy after convoy north day after day for at least a month.
One of the best assignments I drew as a Forward Observer was the time I was loaned to a Basic Training Company as they went out on their Bivouac. Their field problem was a live fire, four day exercise out into the boondocks north of Pleiku. The thing that made this really remarkable was that the trainees were almost to a man, mountaignards and the cadre was Australian. here I was a 6 foot three American with a unit where the typical soldier looked more like a boy scout troop member rather than a member of a fighting unit. Sure, "Try to look short LT" was the reply of my recon sergeant.
At the end of the first day, we stopped to establish our perimeter and get set in for the night. For the most part that meant that the white guys sat down and directed the little brown soldiers on what to do. One of the ammo bearers had the duty of doing shoulder rubs. I swear that after a day carrying a pack that little guy sure did a good job. I wonder what a bad job would have been like. They also made a big pot of tea and we discussed the day's activities. The Aussie Commander would ask about the fire support available and where did I plan to fire my defensive concentrations. For some weird reason, he didn't want me to actually fire them, just plot them and report them to the firing battery. Most nights I would actually fire rounds when with American units. I really kind of wanted to know where they were aimed and what they were going to hit. Oh well.
The only thing I really thought different was the fact that the Commander thought I was his security blanket. Any time I was more than 50 feet from him or just out of sight I would hear him shout, "Guns!, where the hell are my bloody Guns!" I swear that got old because most of the time I was just over behind some brush doing my daily duties and my recon sergeant was right there beside him. I know for a fact that my recon sergeant was well trained and could pick out coordinates as well as I could. I trained him. In fact our radio man was almost as good as he was and we both made sure that he could properly call for fire. If we were in a difficult place we wanted all the good help we could get.
After two or three days of working our way through the hills north of Pleiku we stopped and decided on our Final Field Exercise. We were going to surround and search a village. I'm sure that it was well planned and some compensation had been made to the village chief. We showed up just after first light and put our troops around the village and the command group entered the village. The first thing we heard was the women wailing over in one of the huts at the edge. I guess there had been some sickness and at least one of the kids had died of some disease. There was another kid very sick and would soon die without the help of medical treatment.
I got on the radio and reported the ill child and very soon a Medivac helicopter from the base hospital on the Pleiku Air Force Base was inbound. he took the mother and the child to the base hospital and I found out later that the child was soon well enough to go back home.
We did break down into search parties and watched as each hooch was given a thorough search. I think the advisors were with the soldiers to keep them from stealing. At least half way through the search, I heard the CO holler, "Guns! Where are my bloody Guns!" I went back over to his locations and he was fine, just felt unsure without me.
The end of that adventure was the fact that trucks came out and took us all back to the Camp where they Basic training was being conducted. We had a big graduation dinner and the next morning I attended the Graduation. We were given a jeep ride back over to our base camp. The battalion XO was mad as hell that he didn't know we were going to stay for the Graduation. He had another assignment for LT Guns. or Bloody guns as my recon sergeant called me from then on.
LT Bloody Guns....
Posted by MUD at 11:11 AM