What a Day Yesterday was!

Can Christmas be that far away? 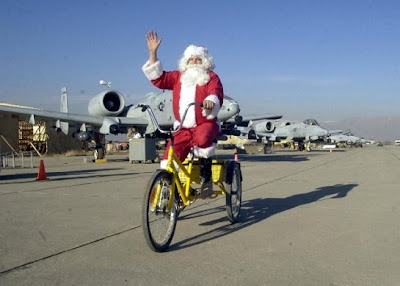 Let me be the first to tell you that there is just no way in hell that I could ever work in a mine far below the surface. I don't care what they pay or how many safety measures they take. I am glad the miners in Chile got out but shudder to think that I would ever have to fit in a small round tube to get out. Kind of like the joke about jumping out of a perfectly good airplane. How many big old guys would they have to cut orders on to throw me off that plane.

I went out to the National Guard Museum at Forbes Field yesterday morning to have coffee and doughnuts with the retired guys that meet the second Wednesday of the month. It is really interesting that most of us managed to retire with a good foundation financially. There was not a lot of negative talk about the lack of a raise in Social Security for the second year in a row. Most of us there have investments that we can get to and don't depend on one form of income to get by. The only talk about the POTUS was about a speaker at the 35th Division Reunion that said some negative things and how most of them felt that the speaker was wrong to say it the way he said it. One person that was there said he didn't disagree with what was said but the time and place was inappropriate.

I think that we all have been through the good and bad times in Washington and know that things will change. Not always for the better but they will change. Somewhere we all hope that the Congress finds a way to tighten the spending a little (or a lot). They all admit that many of the younger guys retired from the Guard and are now working full time for one of the Defense Contractors or as Civilian employees right there in the Guard. There will be some new unemployment but in the long run we will recover. I think our worse fear is that we will down the road fail as the Soviet Union did and things can get a lot tougher.

One common denominator in most of the guys was their love of travel. Most have at least one good trip each year and almost all have traveled to Europe at least once. My favorite thing was to see the wall between the Germanys on one trip and then to drive right through the old gate into East Germany as it all came back together. Having the wife along was bonus. Barb is a great traveler unless it is in high mountains and then she copes pretty well. I think that is looking up in Zion rather than down in Bryce and the Grand Canyon that made it all the better.

Oh well, things to do and places to go.