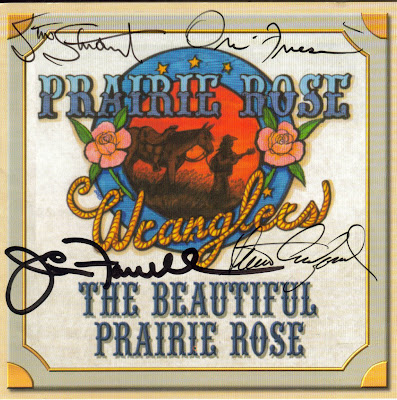 This morning when I got all ready to write here on this blog, a CD by the Prairie Rose Wranglers just fell right off the shelf and into my lap. So, I am listening to cowboy songs while I try to write this. It makes singing along kind of hard but I don't think anyone will notice. 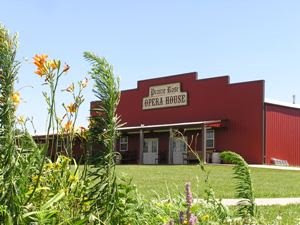 The Prairie Rose Wranglers sing at the Prairie Rose down by Benton, KS and put on a great show. You go in and eat a chuck wagon meal and then get to laugh as they sing and tell jokes that are just my speed. They take the kids into the next room and let them watch movies and then to sing a Deep in the Heart of Texas when they all come back into the dinning room. Great evening. My favorite song by far is the "Cool Clear water" song. I have a tenor falsetto and get to sing the words "water" as a kind of over harmony along with the CD. Puts a smile on my mug that will last all day. I don't want to be serious when I listen to a comedian or attend a show. Ron White is just almost too cerebral for my taste. Good old Jeff and his redneck jokes are more my speed after 7 PM. Speaking of Jeff Foxworthy, did you hear my Red Neck Joke? You might not be a redneck if your car has a Bra and your wife doesn't need one.


The following is a Political Comment. Why does Barry not have a sense of humor? You can't tell stories about his name, his ears, his wife, his friends, his birth certificate and the list goes on... I can't believe that anyone really takes himself that serious unless some thing's wrong. I don't suffer fools gladly if they take themselves too serious. If you read this blog, you probably know that making fun of myself is a past time I enjoy. Did I mention John Edwards? A man with a wife about to die from Cancer needs to keep his pecker out of the payroll. What a dick head. Speaking of "Dick Heads" did you hear that Bill Clinton gave a speech about monogamy and its link to stopping the spread of Aids. (Instead of calling him Mr President, I capitalized dick head) That is about as strange as if the Pope made an advertisement for the Tiller Abortion Clinic. For the record, I think Abortion is a wrong thing to do, but I sure as hell don't want the Government involved with a decision made between a woman and her doctor. I damn sure don't need people telling me what they want if they have signs and yell at me. If you want to be committed, go to the Mayo Clinic.

Did you read that The "Reverend" Freddy Phelps's bunch of protesters tired to go to Canada to show their signs. Got stopped at the border as being undesirable. Man I wish there was some way we could do that right here in Topeka. You never know when you will be driving past some church or public building and there they are all signed up. If they weren't so stupid, I might think it was OK. I can't tolerate people using the first amendment to protect them when what they say is just so dumb that people shake their head and say, "That ain't right".

Oh well, on with the day. Listened to the CD twice and this is all I can think of writing.