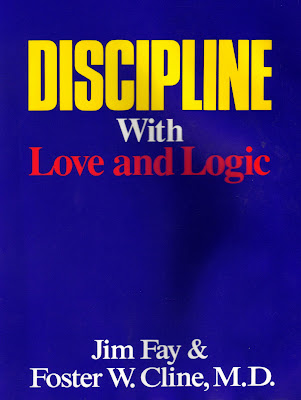 Just so you will know, the Master Gardner here at Rabbit Run has a Masters Degree in Special Education. As she racked up the Graduate Hours, she attended a lot of workshops and classes while writing more papers than I write blogs. All good stuff, but some was more fun than others. Most notable of the entire process (at least for me) were the Love and Logic workshops given by Jim Fay.

In addition to being a pretty straight forward person with a very logical approach, he is funny as hell when he tells you about the real world examples of his process. Whenever Barb went to one of the conferences, I tried to sit in on at least one or two of the instructional periods. He mostly tells you to focus your reaction to the child's behavior to the action and shows you how not to transfer that to the child as anger. It also helps you watch others as they parent their children and know that their frustration could be a lot less if they just had a little help from Jim & Company.

The real great thing about Jim's work is that he really has reached out to the schools and his material is available through most school counselors. There is a really good DVD set that gives you a bunch of coping strategies and let me show you how they work.

Your child comes home in a really bad funk. He or she throws he books down and announces that "I am never going back to school". Instead of being angry about the book throwing, Jim would tell you to ask the child to do something with you that you know they enjoy. After spending a while regaining their emotions (and giving you a chance to figure out what you are going to do) in a very non emotional setting be the adult and lead a discussion on how you love them and why you feel that education is very much worth the hassle. Your example of Love in a calm environment gives them hope that they will someday be able to be calm when their hormones cause them to think the world is out of control.

Yesterday at Wal*Mart I saw a child very angry that her mother had told her to sit down in the cart and not to stand up. Mother told her," For the third and last time, I am telling you to sit the hell down or I'll blister you butt". Jim's approach would have been for the mother to calmly tell the little girl that she is loved so much that if she fell out of the cart she would feel so bad. Everyone would be mad at mother if she got hurt.

If you are struggling with a relationship (especially children) got to your school and see if the counselor has some material from Jim Fay to help you make a difference.