Stormy End to the Day 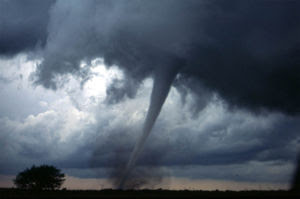 Yesterday as the school day was to end, the sirens across Topeka went off and we were rushed to the basement of the school. The kids were pretty well behaved and probably thought it was just another drill. I went into one of the classrooms and Googled the weather bureau. It was for real as there was a line of severe storms from Silver Lake to Perry. (north of Topeka) There were several tornado sightings but no reported deaths or major injuries. It delayed the buses but at least 30 minutes and I'm sure it will give the new Principal something to work on this summer. It wasn't handled as well as I would have liked even though it was fairly well done. I would give him an A for effort and result and a C+ for the plan.
The teachers handled it well and the students just did their normal average. One or two of the kids were crying when they realized it wasn't just another drill. One shortcoming in the plan is there is no bathroom in the basement. Major shortfall as several of the little guys and gals needed to back upstairs. I escorted several of them.
Oh well, another day another dollar, as today as I am going to be a Para Sub today and work with the sixth grade boys again. Yesterday the gig as a Librarian went well even though I was on my feet a lot. Nothing that a little Aleve can't handle today. I will spend a lot of time just working in the resource room helping the boys finish the mass of homework they have.
Hope you all have a great day. MUD
Posted by MUD at 8:08 AM