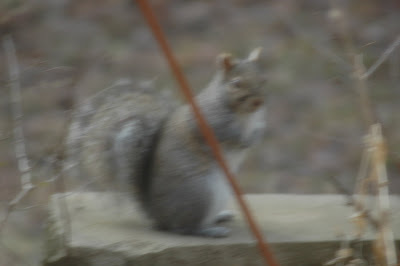 One of the columns in today's paper mentioned that Mike Huckabee's win in Kansas was mentioned three times on meet the press and the fact he had eaten squirrel as a college student was mentioned four times. Barbara laughed at that fact and asked me if I had eaten squirrel. Yes, in that way I am like Mike! That is not to say I like Mike or will vote for him but I have eaten my share of what Ellie May would call critters. Here for your edification is just a list of some of the things I have eaten in my lifetime:
I guess that where and when you grew up made a big difference in what you ate. Kids today have probably not seen a chicken fed like a pet, killed, cleaned and eaten. As a 60 year old, I have had the experience of killing and eating a lot of things. I think that today I have a reverence for wild animals and probably could fill my belly here at Rabbit Run but choose not to. It is lightly snowing and the birds are eating their fill of seeds. There is hardly never a time when one woodpecker or another isn't swinging on the suet block and eating their fill. I'll bet it is pork fat holding those seeds together.
MUD
Posted by MUD at 8:42 AM