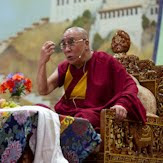 This morning one of the news headlines was that the Dalai Lama gave words of advice to new college graduates. Not being one to graduate this year, I am perplexed why people about to enter the work force would listen to someone who has no intentions in doing so. Doesn't he reflect what the students have done for the first part of their lives by living off someone else and doing only spiritual things? I might be wrong but I think you should be directly involved and "Hooked Up" to be able to give advice to people about to go to work? What are there in Tibet, three or four jobs in the whole country that pay what our minimum wage is? I just don't think that shaving your head and wearing saffron colored robes is much of an answer to the world's problems, or solutions. There is the pinnacle of the jobs, wearing robes, spinning those prayer wheels and begging for rice.

Another great headline is the 1999 Gary Coleman will. Does anyone out there give a good rat's behind what wonderful things he left to mankind. I mean a pair of handcuffs and a Taser just isn't a large estate. His folks ripped him off as a child star and he had to work as a Mall Cop to make ends meet. I'm sure that his divorce last year finished off any money he had still in his name. It should be important what our parents have in their will not what some washed up out of work actor has in his.

Does anyone else wonder how long it will be before there is a round of wars that will drag us into spending more money that we have? Korea, Iran, the whole danged Muslim world against Israel and then there is the US standing on the corner with the world's largest Navy and Army ready to play cop for all the problems. I wonder what would happen if they gave a war and we didn't come to play? Build windmills, Nuclear Power Plants and grow food sounds like a good strategy for the world market. Find a way to convert sea water into the Hydrogen and oxygen needed to power our cars and Compressed natural Gas to power our trucks and trains. What is the chance we would be invaded by our neighbors? Well, Mexico has a good start but most of them are here for the good life not to blow up anything. I'll bet that we could replace the crap we buy from China and Vietnam is short order.

Some day I am going to get up and not read the paper or drink a second cup of coffee just to see if there is any real creative juice left in the old man.