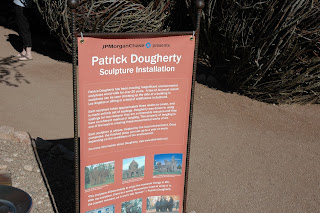 This is a sign support built with Re bar and topped with metal balls This is the sign for the sculptures shown in the next photo. Patrick Dougherty goes to different places and makes the houses out of cut saplings. The material he uses is different in every local. I seem to remember that at least one Indian tribe in the Southwest used this type design for a daytime structure. Wouldn't be of much use where there was a lot of rain but it was a lot cooler inside. 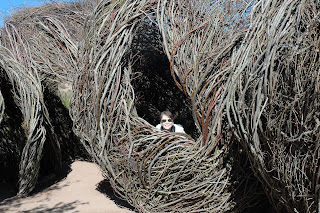 This is Barb in a structure made of Twigs. Just threw this in because I love her. Besides, she laughs at my jokes and knows the answer to most of them. For example, Where was the Declaration of Independence signed? Duh Dennis, at the bottom! 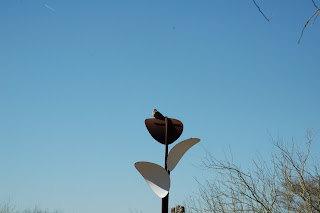 This light is three metal leaves on a pole that reflect light shined up from the ground. The lights were the outside spotlights inside 6" plastic pipe. Again, I didn't see them in the dark but can imagine they worked pretty well. They were also good spots for the dove up on top to sit and coo to try to get a mate. 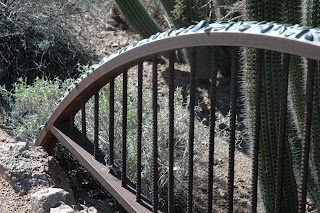 This is one of many hand bridges that I want to copy for the creek at the bottom of the hill
here at rabbit run. The bottom rail is half of an I beam or "C" channel iron. The top rail is the same stuff with the open portion filled with mortar and polished river rocks. The uprights are simply Re-bar cut to length. If the bridge went over a longer distance the bottom rail could be made of 4" boxed steel. The floorboards were just treated lumberand I didn't take a picture of them for some dumb reason they were attached to the bottom rail a little further out on the opening. 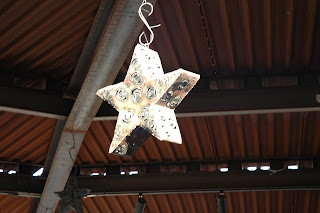 This is one of the lights in a Metal shelter house. It was about 45 feet in diameter with a light hole in the middle. It didn't seem to make much difference that the metal wasn't painted there. Here it would rust out inside a couple of years and the dew would run orange off the poles and stain the concrete. The stars were about two feet across and about 6 inches thick. they had shapes cut in them with a torch. I think the bottom was also cut out so the light could shine downward. There was a light bulb inside and I wish I could have seen them at night.

Most of this is for my brother-in-law Putt-Putt and I hope he knows how much we thought of him during our trip. I wish we had been in Tucson with our camera when the bicycle shop there was open. They were making a recumbent type bike with the wide tires off the schwinn motorcycle look a-likes. They had a lot of different handlebar styles but were using the typical bicycle seats.
MUD
Posted by MUD at 11:18 AM