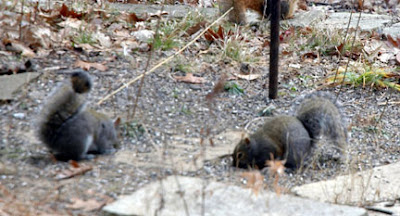 Squirrles Feeding on the scraps dropped by the birds 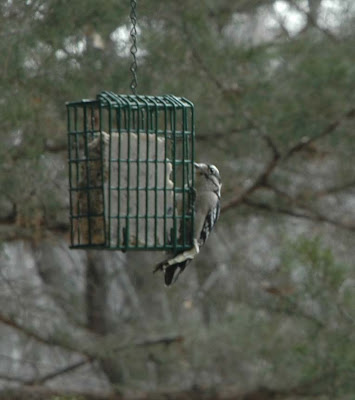 Female Downey Woodpecker. (No red on her head) 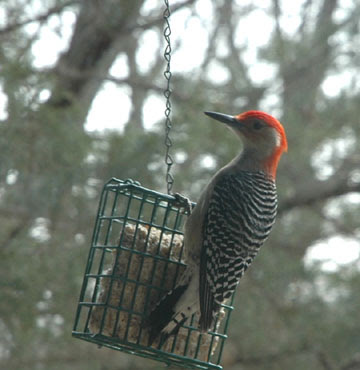 
Hi there, What'cha doin'. Barb and I never go out on the Friday after Thanksgiving to spend money if we can help it. I got up fairly early and unloaded the dish washer and re-loaded it. I am now sitting here at the computer and half heartily watching the birds at the feeders. The assortment of small birds hit the black oil sunflower seed feeder and the woodpeckers hit the suet block. I have a finch feeder set up for the different assortment of finches that come through and those hearty enough to stay here. This time of the year most of the finches are pretty plain and it is not until spring that they will be different colors. We have some that are red and some that look like a flock of canaries.
Barb signed up with some group to count the birds at the feeder and only because we were watching did I noticed that there is a strange woodpecker out there. We have small one's called Downy woodpeckers and big one's called red bellied woodpeckers for the most part. One came in a little while ago that looked like a punk rocker and had a wild hair do. It is definitely not one that is normally in this area by our bird book. Now that I have seen him and have a camera he will probably not show up again. As a matter of fact, there is not a bird in sight now that I have the camera.
At the seed feeder, there is a pretty established pattern. Birds fly in get a seed and then stack back up in a landing pattern that is pretty much one bird and one seed per stop. At the suet block the woodpeckers fly in and take their time. If one of the little birds wants some suet they will fly past the woodpecker and try to get him/her to leave. About the only thing that will scare the big red bellied woodpecker off is the flash of the camera.
My Nikon doesn't like to auto focus through the window. It either gets the window or the trees in focus and the birds are pretty much a blur. I am doing some manual shots right now and will see if they work out. If there are some pictures at the top of this post it worked if not, I need a camera that has not been dropped as many times. (it worked)
MUD
Posted by MUD at 11:10 AM