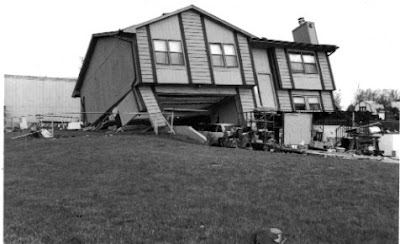 In 1983, a tornado blew down our house on the east side of Topeka. It didn't blow it away, it just blew it off the foundation and stirred the contents. It was considered a total loss and we rebuilt. Through a comedy of errors in dealing with the Small Business Administration we had it paid off in less than five years and wondered what's next.
Barb didn't like the neighbors behind us and wanted to live in the country. For weeks, we spent Saturday and Sunday looking for a good place to live in the woods. We finally found 18 acres in the woods and bought it. We paid it off in short order and started the process of deciding what to build. It was fortuitous that my niece had just graduated from the school of Architecture at KU and we enlisted her in the design process. Carrie Craig just had some great ideas and she and Barb easily laid out a great design. After a review by one of her firm's engineers, a complete set of plans was delivered. For her part I will be forever thankful. I tell a joke about the initial house being 2400 sq feet and Barb made some changes, The next idea was about 2700 feet and Barb wanted to make some more changes. the next floor plan was 3,000 sq feet and I just didn't want it to get any bigger so we built it at that size. Back then it was about estimated at $50.00 a square foot to build.
Barb contacted a local builder and drove him into a hard bargain and we started the building process. If you have never built a house, let me tell you that there are a million and one decisions to be made. We finally worked out a pattern. if it was pretty, it was Barb's decision. If it was structural, the decision was mine. It worked out fine and our marriage survived the months of decisions and building.
The sloping lot was a natural for what is known as a walk out on the lower level. Barb drove the contractor hard to make sure there weren't any extra trees taken out. It left us with a house built in the middle of the woods and we love it. The upstairs was built with cathedral ceilings and natural woodwork. We had the kitchen done by a custom cabinet builder (Custom Woods) in Saint Mary's, KS. All in all it came together and we have lived here since Dec 1989.
The name for our house is from one of the first times we drove in the drive there were rabbit running everywhere. Look at those Rabbits Run!
Posted by MUD at 4:46 PM