What's on Your Table for Thanksgiving? 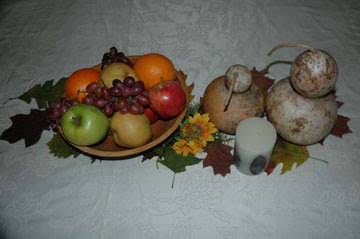 My version of a turkey is much darker after being smoked over a slow hickory fire but the picture gives you the basic idea of the centerpiece of the meal. I will brine the turkey tomorrow and cook it either late in the day or early Thursday.
There will be garlic mashed potatoes, stuffing (Stovetop done in a pan with some sausage,onion and celery) an apple salad, green bean casserole and some pies. My choice of pies is apple and Dave likes chocolate cream.
The most important thing is that the kids will be here and we will all enjoy a good meal and good company. Next year I hope we can do it at their house and have Barb's Mom there. We'll see. I'll probably still do the turkey and a lot of the cooking there but it will be instructional as I'm sure that Barb wants to learn as much as she can.
Put a radio in the old 53 pick-up and it can blow the windows out with 150 watts. I can't imagine what it would be like with an amplifier. Minor problem is the antenna length isn't quite long enough to reach the overhead location where I put the radio. Need an antenna splice or stretcher. I really put it in so I could listen to the radio but this thing will hook up to an i-pod, play CD or MP-3s as well as play the radio. You know that you are in trouble when your value of the truck gets doubled when you put in a tank of gas and a new radio. Oh well.
MUD