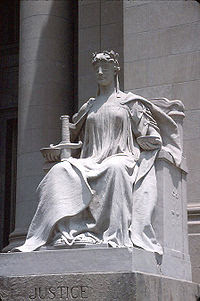 The question I have for today is Justice as it is carried out in today's world Fair?

Where should the trial of the US Soldier that is accused of killing an Iraqi family and raping a 14 year old girl be held. First option is in the US and not in a Military court as he is no longer a soldier. The second option is in the US in a Military Court (Recall him to Active Duty) and the last option is in a court in Iraq. There are Status of Forces Agreements that in most cases preclude the last option. He is currently being tried in a civilian court.
OK, if that is easy, here's a tough one. An Air Force truck driver in Japan is driving his Military Vehicle and doing his Military job and for some reason a persons steps or is pushed off the sidewalk in front of his truck. Where do you hold that trial? Military Court or Civilian court? No so easy this time... The correct answer is that what is the SOFA agreement with Japan now that we are not in a War Time. (I don't know the current agreement but I would say Military Court.

Take that same airman and now he is off duty and he goes to a local store and robs it. Where should he be tried?

I guess that as I have said in the past, Fair sometimes ain't fair. There are many of us that feel mercy should always prevail and those that feel justice should prevail. In many cases both can't and mostly don't. As Sully rightfully pointed out on a comment, "It depends on how the arguement about is, is decided as it is debated". Dang, I hate it when that happens.