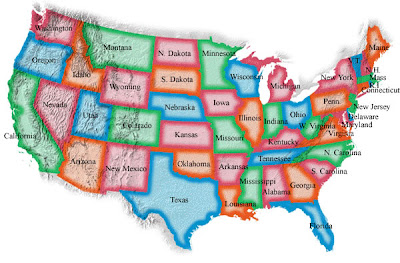 If the geographic center of the contiguous United States is in Kansas, how come Ohio, Illinois and Kentucky calls themselves the Mid West? If you look at the United States, the East Coast is pretty clear. Illinois is along the Mississippi so it should be the west side of the East and Missouri is the east side of the Central US. I would say that Colorado and New Mexico are the east side of the Western US and the Midwest is somewhere in Western Colorado and Utah. For the record I will call Kansas the Heartland. I don't know why this causes me problems but it is like that little ditty that went, "I ain't had no lovin' since January, February, June or July. I had problems with my months because that dang "Shine on, Shine on Harvest Moon" song screwed with my mind. Don't get me started on the days of the months..... I was in my 50's before someone taught me to count the months on my knuckles and the knuckle months were 31 days. Why didn't my third grade teacher show us that instead of giving me a D because I was too damn busy to learn, "30 days has September, April and November...." Stupid, stupid, stupid. Teach me the easy way to remember and I'll remember that way, but just to cram facts at me is the hard way.

Barb and I just had that discussion about free speech that crops up from time to time. I am wary of good intentions to stop stupid speech or speech where the speaker is wrong. Having some organization in charge of making sure the "Fairness Doctrine" is the law of the land is not a good idea. I feel that moving towards that slippery slope will muzzle free speech. Yes, I understand that you can't holler "Fire" in a crowded theater and I understand that liable laws apply when a person is not in the public eye. It probably would be more prudent to say I disagree with the Government leaders than to say they are a heard of stupid cows. (Mostly because I think other than methane, cows probably don't do anything that deliberately hurts us and I love a good steak)

IMHO, or In My Humble Opinion, should be applied to any blog and electronic message. The problem is how do we ensure that Facts and opinions are duly noted? How do we make the print and electronic Media connote that fine line when they cross it? This discussion has been held for a long time. In fact read Bradbury's "Fahrenheit 451" or Orwell's "1984".

Oh well, Happy Mother's Day for all you mothers out there. Try to enjoy what you have and not focus only what you want. I buy lottery tickets to focus my wants on. When I win the lottery I will..... Hire a Lawyer to make sure I have as much free speech as I can afford.