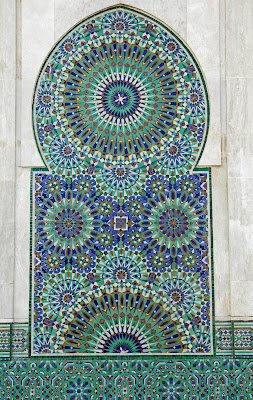 This is the sheep hearding village where a local church helped the women start making rugs to sell and they are living a better life each month. This was a brutal winter and they lost a lot of livestock and trapped in the village for days at a time. The roofs are covered with old milk cans flattened and overlapped like shingles. There is one wind powered generator visible and plastic to help the roofs turn water. 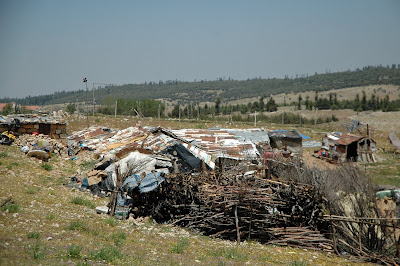 Where do I start about a country that is so splendid on one hand and so basic on the other. It is a monarchy and while I was there, I was warned to not speak out against the king. Being from a country where free speech is allowed it was difficult to with hold my writing there. I want to start by saying that while I do not think a monarchy is the best way for a country in today's world, The King there is working very hard at tasks that many might just not work at at all.
Imagine that a lot of the country is from the 10th to the 14th century and even if people wanted to rebuild they probably would face world condemnation because of fact that many things are on the World Heritage list and at least the outside cannot change. The architecture there is primarily concrete frame buildings with red clay tile walls covered with stucco. There is almost no wood in the structures, only in the furniture. Most of the flat surfaces in the front of the house are covered with magnificent tile and you could look all day and not fully appreciate the splendor. They could so benefit from solar heat and insulation but these things are better built in to the structure as they are built rather than retrofitted. I did talk to a couple of US kids there tat are trying to build solar heating panels for local schools and are facing the problem that the structures need to not look different and have solar panels that do.
There in the Muslim world there is a delicate balance of education and religion that the government must keep in check. The literacy rate is on the rise and the adult women literacy is low at somewhere in the 30% range and the men's in the 60%. The only native person that could talk about the religion is that the imams are controlled in their messages and their sermons are almost such that they put you to sleep. They are fearful that fundamentalism and its hatred of the infidel might creep into a country where the people can't read and listen to other people for advice on the rest of the world.
I really didn't want to be negative about Morocco here. The people were for the most part great to visit with and to do business with. They have a french language sprinkled in with the Arabic they spoke. In fact most people would assume that because we were white we were French. Fortunately our host and hostess were there to assist us in our efforts to speak, understand and be understood. If you intend to visit Morocco and do not speak some French, I would suggest a tour that has a bus and a guide to take you around. Do not drink the water, and eat only food that is cooked. Eat liberally of the bread and let your eyes drink in the beauty of a land that is different. Be prepared for beautiful buildings that are not heated, and in the pictures below you will notice there is a solar panel on the roof of a sheep herding village to power the lights and one cell phone.
Be prepared for a culture that lives their motto of "Allah wills" (or better said as if Alla wills it, it will happen) and have a second saying that means whatever and sounds like Wacka or wha cha with the second syllable said like clearing a cockroach from your throat. About the time I thought I could understand and respond appropriately they changed the greeting and all I could do is stand there looking like a tourist as our hosts would share kisses and hand shakes and the mandatory small talk about family and health that extended even text messages into a blog length prior to getting to the heart of the matter.
MUD
Posted by MUD at 10:44 AM