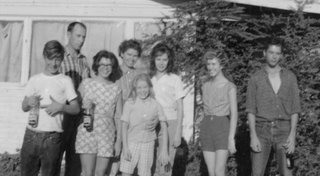 This is a 1962 photo of Barb's family. I goofed up and made it black and white instead of color but hey, this is only a blog and not "Newsweek". I'm not sure why Pepsi made it in the picture so big but hey if it was my family it would have been beer.

Went to a KU Basketball game last night. They played Emporia, a Div II team and had a tough time in the first half. They absolutely dominated in the second half. The person that gave us the tickets gave us a parking pass to the lot right across the street and it was such a treat. I could do more of that. For the rest of the season I'll probably just watch on TV.

Man did the elections here go pretty much as expected. The only shocker was the Nancy Boyda win over Jim Ryan. The polls showed Boyda ahead a couple of points and the Republicans sent in the VP and the President. That caused the margin to open up to 10% from about 3. Bad choice for Ryan to embrace the Pres. The rest of the races went about as expected. Throw mud in an election in Kansas and expect to go down in flames.

Lots to do today so I'd better get back on it. MUD.