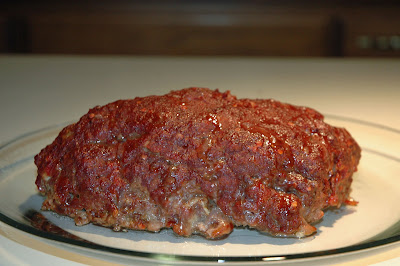 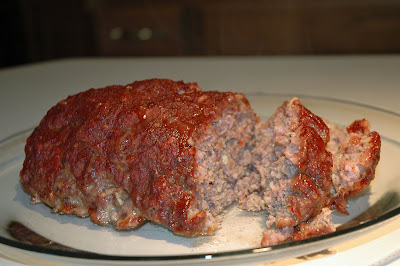 One of my cooking buddies made a meatloaf for our Pot Luck Lunch that was darned good. It had a Cinnamon Apple meatloaf sauce on it. I mentioned it in one of my blogs and Flea mentioned that it sounded like it needed to be made with ground pork and an apple. So, here is what I did.
2Lbs ground pork
1 Cup bread Crumbs
1 Granny Smith apple shredded with a grater (No seeds or skins)
1 egg, beaten
3 Teaspoons of Chipolte hot sauce by Tabasco (This is a new flavor that I love)
1 Cup red pepper
1 tablespoon of Italian Seasonings
1 teaspoon of salt
1/4 teaspoon of pepper (or red pepper flakes for those of you that live adventurous)
Top with Paula Dean's Apple Cinnamon Meatloaf Sauce
Bake at 350 for 1 1/2 hours.
I mixed all the ingredients in a big bowl and got in there with my hands and mixed until it was a homo, hemo, oh heck, all mixed well. I formed the loaf into a big pan and put the topping on it. Just for the record, I couldn't find the Paula Dean's Apple Cinnamon sauce so I made some of my own with some cinnamon candy hearts melted into a tablespoon of water and added to a small can of tomato sauce. I added some red pepper flakes and some extra cinnamon. Truthfully it smelled like cinnamon rolls while cooking but tasted a lot like Paula's sauce. You could add onions and celery to the meat mixture for texture and taste but it wasn't needed. You could not taste the apples as a separate component. All I tasted was good.
I let it rest while I was taking pictures and then served it with some Brocolli, carrots from one of those steam in bags and enjoyed. I did my typical thing in that I ate too much after spending so much time smelling it. I think that ground pork just calls out for apples and the cinnamon taste complemented the apples. If I was serving this for a group, I would make mashed potatoes and a gravy.
MUD
Posted by MUD at 1:08 PM