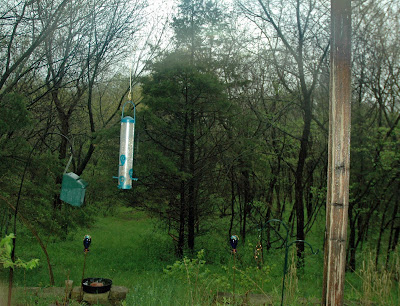 For those of us in the Heartland, the lack of sunlight is causing stress. Add to that the abundance of rain and the growing grass and it is down right disheartening. I look out to the south and all I see is green taking over the countryside. There is just no way I could even get out and walk down the slippery hill let alone mow. Oh well, a good book is waiting to be finished and a better book is waiting for me to get started.

Did ya' listen to the Presidential News Conference last night. Barry ended with the complaint that there were a lot of important things waiting for him when he started. Did he think it was going to be easy? Did he think that it wasn't work? He listed all the things that are problems and then added the Health Care issue. I think he needs to understand that Health Care is his issue added to the list. That one issue the a majority of us think can wait. He is the one that dealt that hand and he can fold it for now. Don't get me started about Education for now.

What do you think is important? For me it is to get the Government Spending under Control. Don't spend another dime until we are sure that we know what it is being spent on and what it is for. There needs to be a Government Accounting Office audit on how the stimulus got from 400 Billion to 1 trillion. Those responsible for Pork in that bill needs to be identified and the pork eliminated.

Jobs are important? Lets see, the President has eliminated the CEO of GM, is about to eliminate Pontiac and has hinted that Saturn as the last in may be the next out. How many million of people losing their jobs is that? I guess all that talk about jobs was just that, all talk.

Speaking of stupid things, I got a notice in the mail that my retirement check is going to increase by about $100. How you say? By lowering the amount of withholding they are taking out each month. Instead of doing a cross check to see if I paid enough in, they just cut the withholding. Crap, I paid a penalty last year because I didn't have enough coming out and now they withhold less. Yes, I got a monthly raise but will have to pay that and more back come the next tax year. Crap, no one is in charge.
Do you know when Cabin feaver has set in? When you drive to Lawrence to see the new Wal*Mart and to get a piece of that new Kentucky Grilled Chicken. How do you know when your wife also suffers that malady? When she goes with you.

Rain, rain, go away. Come again another day in August.