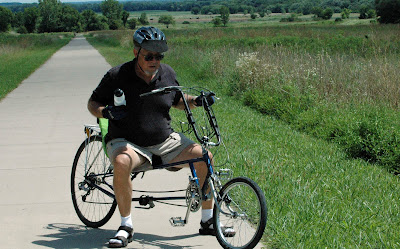 One of the quotes my brother attributed to his grandson Ethan was, "Lets get some sticks and go down to the c'eek and look for 'nakes" If he lived nearer to Lawrence, he wouldn't have to look hard or long. Yesterday Barb asked to go to Lawrence again to ride our bikes. Either I'm getting slower or she is getting faster. Oh well, back to the snake story. A couple of weeks ago we parked in the Arboretum parking lot by the South West By-Pass. There is a lovely rocked area with a stream passing right through the middle. There was a group of kids annoying a copperhead and we had to chase them away. I swear one kid had a small net on a one foot stick and that's close enough to get bit not catch one.
Well, yesterday we parked in the same area but this time headed east on the bike path. I won't tell you about all the kids on the sidewalk near the school. They don't have a good sense of self let alone the concept of sharing the sidewalk. However, I rode well east and as I returned to the truck, a kid was sitting on his bike and announced that I needed to careful of the snake. Right where the bridge on the path crossed a small creek there was a very ugly copperhead sunning himself. To me, it looked like his eyes were cloudy and his skin was very discolored. I think he was about to shed his skin but I really didn't ask him. He was about an inch and a half in diameter and two to three feet long. He was a nasty booger and it wasn't until I stomped my feet on the bridge that he decided to get off the bridge, I knew Barb was a couple of hundred yards behind me and I wanted the path to be clear when she rode by.
Now, I know that the path travels along a swampy area in Lawrence all the way out to Clinton Lake. I know that snakes live in swampy areas where there are rocks and places to hide. I just wonder if anyone has really sat down and counted the number of snakes in that area. Each day many students pass that way to and from school. Might be worth a look by the Biology students at KU. If I have seen two, just how many are there?
No, I haven't changed my political views, I have only changed my focus from ranting globally to looking at the path locally. "'Nakes in the keek" will do that to you.
MUD
Posted by MUD at 9:36 AM