Another Day, Another Dollar! 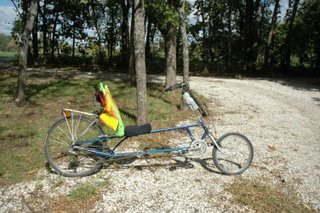 We had the kids over yesterday evening for supper. Barb has a new Weight Watcher cook book and we are trying some new meals. I am pretty sure it is a trick to slim me down as I feel that Barb is looking good. She has her mother' body type and has always stayed slim and trim. While I on the other hand, have managed to add a couple of pounds a year for most of my adult life.
Yesterday's meal was a turkey bean soup that I would call a turkey Chili. (They called it a turkey bean soup, Duh Dennis) The recipe called for white Canellini beans. Dave and I agreed that about any kind of bean would have been as good and black beans would be the best. I would have added more cumin and perhaps some more white pepper to spice it up even more. Everyone seemed to like it and I noticed the leftovers went home for today's lunch. I also cooked some cabbage with onions and red peppers in a sweet smoky sauce that was interesting. It would have been wonderful with some smoky pork but the purpose of the Wednesday meal is slim and trim and most of my pork meals aren't in the low fat category.

We discussed with Dave his plans for this semester at Washburn. He said he hasn't felt well or had the time to enroll for this semester. We have decided that it is his decision so for now are going to stay out of the controlling parent mode on the issue. We will be supportive of his decision and if needs to take a semester off, so be it. He has really been getting very involved with his employer, Best Buy. He has always had unique friends and to be really tight with the Geek Squad should not be a surprise. He isn't on the squad for right now but thinks he might be in line for a position there. He will probably be working full time between his Customer Service time on the phone and time with the Geek Squad. With his electronic talents and his customer service phone experience he is a natural.

What size is your TV? Dave has his heart set on a 50 inch LCD TV and hopes his boss(es) will see it in their hearts to discount a floor model when they are replaced with a new model sometime soon. I asked him about getting an old model and just how long he thinks it would last. He said that the LCD screens are good for at least 75,000 hours. He also said there isn't much else because everything else is electronic. Last time we were together in the store he showed me and it was the best picture in he store.

Yesterday, Dave said that his car was running a little strange. We went out and took a look at it starting under the hood. I gave him the Ken problem solving process. His recommendation is to start looking at the obvious first. Things like a vacuum line leaking. Is the Check engine light on? move on through the spark plug wires... and low and behold, a spark plug boot had fallen loose. One of those things that unless you actually grip the boot and move it it looked OK. Had all those things been OK, I would have taken it over to the local parts store where they have a computer that they will hook up and give you a reading. That reading will tell you what the computer has recorded as a fault and mostly it is "Plug and Chug" modules into the system until it gets better. It really pisses me off that the dealership charges you $80.00 to use their machine to tell you what needs fixed. That should be a part of the regular labor hours not a separate charge. For now, I don't own one of those handy dandy little engine check systems but one of these days they will be on sale or I will find one at a thrift store or Pawn shop.

It is kind of frustrating outside. The sun is shinning and it started just about 25 degrees. It ill get to about 40 and seem like it is time to be out. It just isn't quite warm enough to bike ride.. I know, if I was real hardcore (I'm not) I would get out there and make circles with the pedals. The lake path is now finished and should go over and do the 8 mile route.

Better get moving and do something. Have a great day out there.