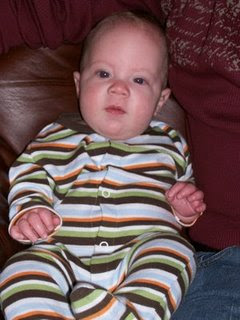 Is it just me or does this picture of Austin make him look like that baby in the on line stock purchasing commercial who orders stock on-line and then erps up his last meal? Barb said that Austin is cute in this little striped outfit, but it would just make me look fat. I would just say this is what the future is all about.
It is not what you do when people are watching that cites the amount of character you have. It is what you do when no one is watching. Here are a couple of times in my life that I use as an example of my character.

Back in 1969 or early 1970, I was back on the college campus at Wichita State after a tour in Vietnam. I happened to be in the bathroom of the Campus Activity Center (CAC) and a student ran in and said come quick they are burning a US flag out front of the CAC. I calmly told him that I had a spotless record but I wouldn't mind having an arrest there for kicking someones ass for burning the flag I had just fought for. I told him to run along and play and don't invite me. You have every right to be an ass but don't expect me to play games with my patriotism.

A friend of mine there at WSU who had not been drafted into the service and remained on the Campus, came to me with a Business proposal. He needed about $100 to set up a lab to make drugs and guaranteed that I would get either double my money or nothing for my investment. He would guarantee that no one would know. Guess who didn't finance a drug lab? No, to my knowledge he didn't get caught but it was a matter of principle.

In the area of right decisions I make, I would like to point out that I often make Barb the heavy when I know that the thing under consideration is stupid. I will haul her out as the sounding board and use her brilliant "flashes of the obvious" when I had no intention of doing such a stupid thing to start with. I can count on one hand (no, one finger raised in a salute) the times she has ever gone along with a stupid idea. After all, she did marry me and come to Kansas.

In the long haul of things, the other day on our trip to Tulsa, I asked Barb what would you have done different from your game plan we discussed back in the Yermo dump in 1967? (That was one place we could go to be alone when we were dating.) She said that perhaps the location might have been different, but the end result was where she was going. I guess it is a good thing I came along for the ride.