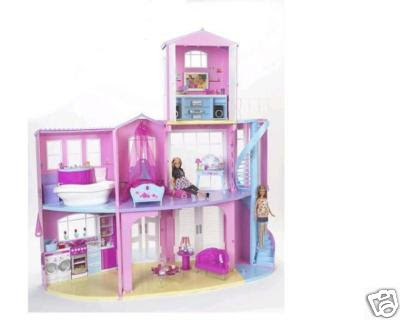 This is as close to what we put together as I could find. To tell the truth, I really don't remember which one of the Barbie doll houses we put together other it was multi storied.
One of Barb's many magazines had a short story about Christmas Presents over the years and the mad rush some people have to get them. It should be no surprise to any parent that the Advertising blitz each year just makes the latest game, doll or red rider a "Have to Have" to the kids out there watching too much TV.

I could tell you about some of the things I wanted as a kid but my most memorable Christmas present was the Tree House Barbie caper. After an evening of fun at my brother's house the kids finally went to bed and it was time to put the presents under the tree. All went well until the new "Stepmother from Hell" decided that after consuming way too much Scotch my brother and I would assemble the tree house. I would have handed her the tools and gone to bed but I think at that point there was a slim hope that if all went well that marriage could be salvaged. That dream died sometime the next year but on to the doll house.

I am sure that most normal guys would be able to put tab A in Slot A but somewhere the translation of the Chinese to English and the diagram things just didn't seem to make a whole lot of sense. I'm sure that even completely sober (we weren't) it would have been a challenge. I think that about 4 AM things came together in such a manner that it stood by its self and we drifted off to bed. I might ad that by this point we had been up at least 4 hours longer than anyone else. About the first glimmer of light, the kids hit the floor with squeals of delight. Being a kid myself (at least inside) I rolled out of bed and promptly fell to my knees with a hang over that three aspirins, two glasses of water and half of a pot of coffee did not fix.

The kids did their best to be about as happy as the commercials. Somewhere near the end of the early morning fun my little niece looked at the tree house and said that Santa didn't do a very good job putting it together. It didn't look like the picture. I got out the tools and with about 10 minutes of her help had that sucker looking like the picture and all was well.

Had we waited until sobriety and day break coincided the niece would have been very happy to help put that damn tree house together. I'm convinced that adults have such strange ideas of what kids expect that they go to lengths beyond reason to attempt to make Christmas everything they ever wanted and then some.