In The News Today 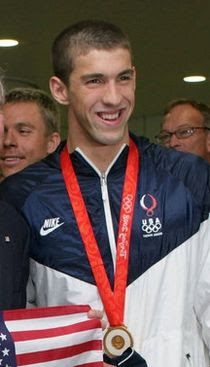 Mike, You learn to make good choices and avoid bad choices from the lessons you learn from making bad choices. Everyone that never drank a drink underage or never smoked Pot get to stand up and be angry. Don't people understand that you spent years in the pool to be able to swim? I think you deserve to have a real life and try things you have never done. If anyone played attention to what Michael Phelps ate for breakfast, it was clear that he didn't eat Kellogg's corn flakes. If they want to take their money away, so be it.

Instead of just reporting the unemployment numbers, all the channels have reported the story and their surprise at the stock market going up. When the stock market is near the bottom and it is bouncing around in the mud, don't expect it to react like it might if it were nearer the top. At 12,000, the DOW might have responded with a negative move. At 7000, there isn't a lot of negative to go. Besides, what ever happened to the News being unfiltered information. What do I care if some young person is surprised about what the stock Market does. The stock prices are based on the value of the company. In true value terms, this is the level where the stock is priced the best. Remember the old saying Buy low and sell high? The buying should support this price for a while.

Ruth Bader Ginsburg was diagnosed with Pancreatic Cancer this week and had surgery. I don't understand why she doesn't retire and live the rest of her life. Many of the people with cancer of the pancreas don't live long.

Why is the spending bill being delayed? The Republicans haven't added their pork yet. It would be great if they were holding it up to try to make sense. Nah, just adding more of their pork. You can tell when a politician is telling lies when his lips are moving. Have you heard that the 800 Billion plan is now 940 Billion? Stand by for the trillion dollar bail out for all the special projects. The economy will have to wait. If 800 Billion didn't work, throw another 900 Billion and watch. BS.