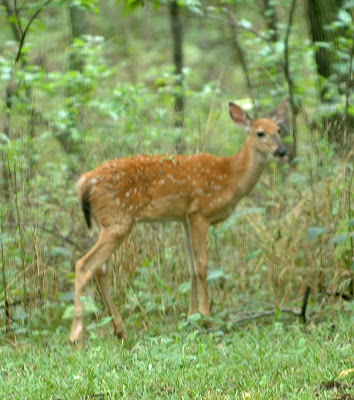 Last year, a mother deer brought her two fawns to our orchard and showed them how to steal apples and pears. This year she is introducing a new fawn to a life of thievery. The good news is that because of the rain, we have an abundance of apples. So long as they stay out of the flower garden and the fenced vegetable garden things will probably be OK.
I am still looking at the previously owned cars out there just off lease. There was one Malibu that was about a thousand dollars more than the others. The guy on the used car lot said that it was more because it was one they took in a trade. Hum, is a car worth more because they took it in trade? I don't think so. I'll bet the look on my face told him that as he found a good way to move to another car quickly.
Is it still August? It is getting down into the 50's at night here and the days in the low 70's. Strange that I feel the need for a jacket this early in the year. I'm sure that our friends out in Elko and Colorado all have that experience. Those wimps of us that live in Kansas don't normally need one well into late September or October.
Lynn Jenkins is doing her best to retract her words "Great White Hope" and saying it wasn't directed at the White House. Lets see, can she make a very charged statement as she retracts another. The "White House"? I am reminded of the old saying that is better to make them wonder if you are a fool rather than open your mouth and prove it.
Yesterday barb said she wanted to drive west until she could see the sun. I took her to Sam's club and we managed to find about $97.00 worth of sunshine. Dang, those pistachios are getting expensive. almost $20 for a 4 lb sack. I also got a new WEB Griffin book. It is a continuation of the Philadelphia Police saga. I almost have to go back and read that series to get up to speed. He and his son did a nice job of bringing me back up to speed in the life of Matthew Payne. With the cloudy weather, I do have something to read.
Shine on, Shine on big old sun, up in the sky. Harvest Mood be damned, I want sun shine and I want it now.
MUD
Posted by MUD at 9:34 AM