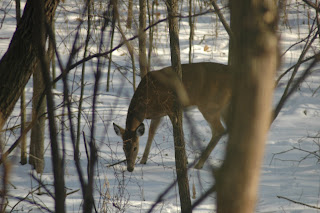 This morning about 7 AM I put my coat on and went in search of the morning paper. It was so cold that the snow squeaked as I walked on it. It was cold with a calm wind and that kind of cold just creeps into your coat without the full frontal assault of a normal north storm breeze. I swear the other day even my warmest coat was no match for the north wind but today I could have survived perhaps 20 minutes. It is so cold that the birds water dish is giving off steam. I bought one of those heated dog water dish and keep it full of fresh water for my feathered friends.
I have been putting out some extra seed on the ground for the juncos and doves. The back porch is sheltered by an overhanging deck and that one small patch of snow free concrete becomes the home to a mob of birds once it warms up enough to get them stirring. They also seem to make a stop late in the day to fuel up for the long cold winter night.
One of Barb's friends and coordinator of the Master Gardner course is our County Extension Agent, Phil Sell. He writes for a weekend magazine in the local paper. Today he tried to put all the links between gardening and the Legislature. After talking about thorns, pruning, cutting and growing his final comment was "Compost Happens". Had his writing been more pithy I would have copied more for you. It hardly put a smile on my face so he will remain unpublished.
After searching through the Elderhostel catalog Barb finally hit on the right place at the right time for us to go celebrate our 40th Anniversary. I wouldn't think it possible that we have been married that long but I noticed that the new Attorney General of Kansas was born the year I graduated from High School. Barb has selected Lafayette, Louisianan (Yes between those two names I had to rely on spell checker to get them both right) in late February. It is one of those photo classes with an emphasis on digital. It sounded warm and out of the hurricane season for that part of the world. One thing we had to do was fly there because of Barb's teaching a Wilton's cake decorating class on the Sunday so we are flying into New Orleans and renting a car. The weekly rental car rate was about the same as Boise but there are about $70 worth of taxes and airport fees that were not in Boise. Oh well, I will go and try to keep a smile on my face. Put it on plastic and pay it when we get home. At least we do have the $ to pay it.
Better get on with the day and put a smile on my face. MUD
Posted by MUD at 9:28 AM