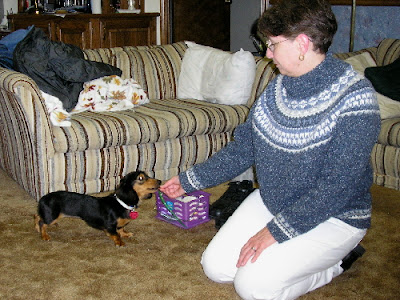 Back in 2004, I read about a breeder near Garnett Kansas that had been placed on a warning by the State for running a puppy mill in an improper manner. He was raising dogs and keeping them in cages and not feeding them enough. They took about 27 dogs from the breeder and after they were released for adoption, I tried to get one of the dogs. I found out that they would be for adoption in Lawrence and Topeka. I put my name on the list in Lawrence and they showed me the dogs. They had 14 and had the first 13 pledged to families. I asked to see the last one and they weren't sure they were going to let her be adopted. The said she was mean and would bite. I reached into the pen and sure enough, she blocked my hand with her nose. It wasn't a bite but fear that someone was going to hurt her. Grissy was one dirty matted little long haired dachshund You can see from the picture above that Grissy is very skinny when we first got her home. You don't even know how hard it was to get Grissy to accept Barb. She would bark and bark and shy away. Makes me wonder if the breeder had a woman that took care of the dogs. Barb is a caring and warm person and tried to be friends. 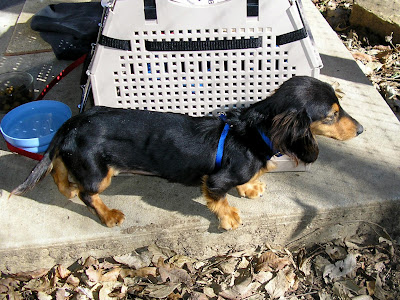 Grissy was not housebroken and in the picture above, you can see her ribs showing. She was one little dog that didn't know what a kind word was or how to be a dog. 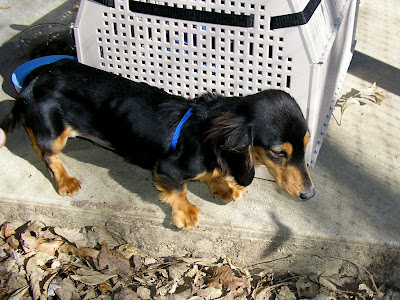 Grissy wouldn't come out of her cage the first three or four days she was in our home. She would come out to eat and pee on papers if no one in the room. I worked hard to make her feel good and know that she was going to be treated well. After a week she would come out of the cage if I kind of pulled the blanket out with her on it. I got her in my lap one day and I said you know, all this petting should make that little tail wag. I kind of touched her tail and I got my first wag. There was a lot of work, love and attention in those first weeks.
I worked with her for a couple of weeks and then took her to Idaho to be with our friend Ken.
I will show you some of the pictures of that happy little dog with her family there tomorrow.
MUD
Posted by MUD at 4:56 PM