Snow on the Ground and COLD Headed this way! 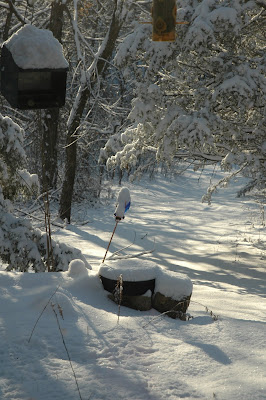 It started early yesterday and ended sometime after midnight. We have about 4 inches of new snow and some drifts that will go a foot easily. There is an arctic air blast coming later today or tomorrow that will have much colder temps and some wind. Having lived here in Kansas most of my life I have seen these winds turn into a ground effects blizzard and the roads blow shut. It won't get warm enough today to cause the snow to crust over so wind can be a big problem.

I apologize that I called yesterday's post a political rant. It was hardly a whimper. I am probably a lot like most of you and have people I wouldn't vote for but haven't made up my mind who I will vote for. I shudder when I hear that there are politicians that think a way out of our problems is more spending. What we need is a leader that asks us to be more responsible and tells congress to do the same. I hear a lot about the cost of the war but a lot of that cost is the sunk cost of having the soldiers anywhere. What do you think it costs to have 18,000 or 19,000 soldiers at Fort Riley? If you want to do something about the gross cost of lives, get the drunks off the street and make people wear seat belts. There was a Canadian basketball team that had an accident and 7 or 8 were killed. They were ejected because they weren't wearing their seat belts. DUH! We are up to what 5,000 killed in three or four years? We lose 50,000 a year to traffic accident s here in the US. Our teenagers drive in groups and don't wear their belts and hardly a week doesn't go by where there isn't some student killed when they are ejected from their car.

I think everyone needs a dose of reality and to tighten their belts, go to work and pay their bills. The Government has no place leading us not into temptation and saving ourselves from ourselves. I love to listen to the Saturday "I'm debt free" programs. They advocate paying your bills from the smallest to the largest and getting a second job if you need to pay your debts off quicker. No one is totally out of control if they can get a second job delivering Pizza's. Everyone needs to start with a good education first and build on that. The hardest thing is to realize that you are your own best friend and work is the best way to earn money.