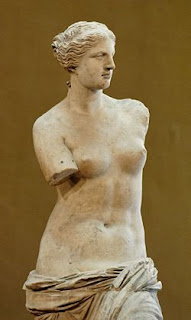 Many feel that the Venus De Milo the armless statue in the Louvre is the concept of perfection. She is called the Aphrodite or goddess of love in marble. I find it very interesting that we accept the concept of a statue with her arms broken off as such a pantheon of perfection compared with how we make such a big deal out being perfect in our sports teams and our lives.

The New England Patriots are 13-0, The Carolina Tar Heels are 15-0, the Hawks are 15-0. What about the teams that are darned good and say 13-2? For who are we to say that almost perfect is way far from good enough? (Yes, I know that New England has entered the part of their year that says win or go home. It is like that when the final 65 teams play in the NCAA basketball playoffs called March Madness) There is a time that winning each game is important but perfect, run the table, no losses or we are bums? Get real!

Could you imagine if we held ourselves to that standard. Has any salesman ever closed 100% of his sales. Well, there is probably a drugdealer that has come close but his failure means jail or prison time. Can you imagine how nuts it would be to work as a car salesman if your boss expected no one to walk off the lot but drive off in a new car?

Can you imagine if you miss one deadline and you are fired? Perfection either makes people overly competitive or makes liars out of great people. I am not saying that we should not set goals that cause us to stretch to achieve them, I am saying that we should celebrate our successes and set new one's.

Somewhere in life there needs to me a movement forward that affirms our success and we need to put it in the book and move on. Oh sure, it is easy for me to say this now that I am retired. I worked darn hard at every job I held and there were a lot of nights I struggled with how to measure, display and accept my performance and the performance teams I had been assigned to.

One thing that I fight is the MBA philosophy that causes and lets everything to be measured and reported in such detail that it becomes a fog of data not information on how to be better. The statistical analysis of things such as calls per minute in a call center does not get the bell rung if the customers feel we don't answer their questions or handle their problems. Hell, that makes the employees as crazy as the customer. It may be nice to build a framework to support the call that has certain elements but the real measure of success is did the needed job get done. It may be tough to tell a person they can't have any ore telephone service if they don't pay their bill, but it is what keeps the company in Business. Ask GTE if their "GTECC" project would have made it if more people paid their bill. Ask one of the TeleTech workers if they were allowed to tell the customer to "Pay their bill". Oh sure, some MBA could tell you how long the average call was and the quality control people could tell you if all the elements of the call were included but the final answer was that GTECC failed because it lost money. The newest employee could tell you how long overdue the bills got and that no one makes money and gives their product away like GTE did.

In the final analysis, we are the toughest judge of our own performance. I think we should listen to our inner muse and either do more or do it better when we think we need to raise the goals. Put your goals in priority and do the most important things first. Work hard, laugh, love do a little cleaning and get enough sleep. Isn't that enough? Is it perfect? Oh hell, I guess this isn't perfect enough. But, it is what you get for the price you pay!
MUD
Posted by MUD at 9:48 AM