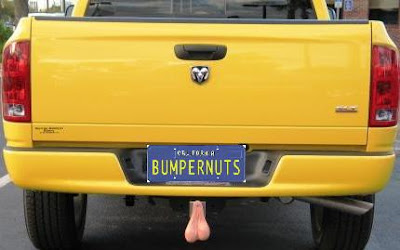 The other day I was riding with my son and a truck passed us with something hanging from the hole where the trailer hitch should be. Not driving gave me a lot more time to look around and I finally figured out what it was hanging below the bumper. Truck Nuts.
After a good laugh I started to wonder why would someone put such a thing on their truck. Is that a form of free speech? What does it mean, other that you can and someone made them so you could. Is stupid speech in the category of free speech? I guess the coffee cup that was shaped like a breast and you could drink through the nipple was in that poor taste but free category. That cup got passed with laughter at our family white elephant gift exchange until some lady in the family finally "dropped" it. I'm sure that was a literal and figurative drop. Whatever she did, it failed to come back after about three years.
On one of the blogs I read (It is a Canadian and man do they have trouble with the free speech issue) the issue of Jokes about other people, races, places and things was discussed. They said that must contain a grain of truth to really be on point. Kind of like the old KKK joke that we need to do something about the blacks because they have so many children and they'll outnumber us soon. Guess what Bubba between the blacks, the Mexicans and the Muslims we are soon to be the minority here in pick-up land.
I have been re-reading a book by a long lost cousin, Mark tiger Edmonds, called "The Ghost of Scootertrash Past" He rants about a lot of things including the smoke free issue. Our morning paper had an opinion column where some guy was pissed that people could drive SUVs and not not be allowed to smoke in a restaurant. Guess what guy, if you drove your SUV inside the restaurant you would be banned from there also. Why is it so hard for people to realize that what they do does effect others if they blow columns of blue smoke in the air while I am trying to eat? Hell, the EPA should step in and make it illegal for bar workers to be expose to the kind of air they suffer. I'm sure that if it were an assembly plant they would have a million dollars worth of fines or would have to install air scrubbers to keep the air clean. Mark does his best to look like a 60's biker but he rides a BMW. "Kerist on a Crutch" how can anyone who rides a motorcycle that cost more than my first house complain about what anyone else does. For what his bike cost, he could have bought a good truck. He could have traveled in all kinds of weather and had a place to get into out of the rain and sleep if he wanted. He spends a lot of time complaining about the cost of Motel rooms and the fact that they are all run by Pakistanis.
Oh crap, I'm starting to sound like tiger. Oh well, it just started to snow.
MUD
Posted by MUD at 9:36 AM