Man its Cold Out There! 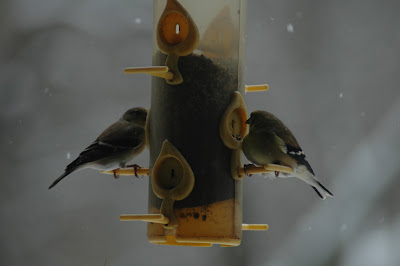 The temperature here is near single digits this morning and the birds are hitting the feeders like it was free! Well, Duh Dennis! It is free. Based on the amount they eat it must be fairly good also.
After the Obligatory comment on the weather, I will also wish you all a new year. You make it whatever you want out of that. Make it happy, prosperous, joyous or whatever, because it will happen no matter what you want. Yesterday Barb and I were putting up a new calendar and when I took the 2007 one down Barb told me to put up the 2006 one. I reminded her that just because she was no longer teaching she should not put her mid in neutral steer and count down. You must count up sweety. (Neutral Steer is the condition of driving a tank and you aren't telling it go right or left, just letting it go where it wants)
Some of my New Year Plans are:
I'm going to go to the west side of town this AM and buy the new W.E.B. Griffin book the shooters. I will buy it a Sam's Club for about $17.00. I could break down and buy one of those Book Club memberships at Barnes and Nobles but even then the book is over $20.00 after spending $10.00 on a membership. Oh well, the football and basketball games will be fun for a couple of days. MUD
Posted by MUD at 10:22 AM