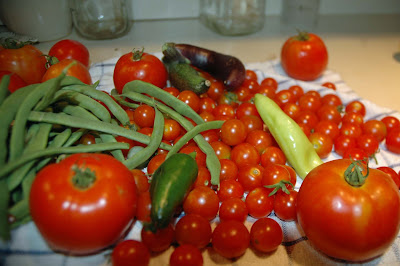 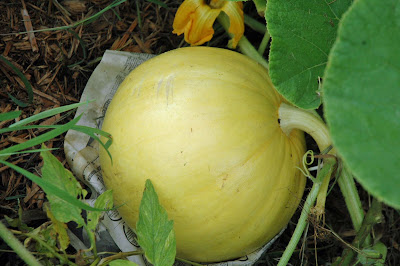 One that got away 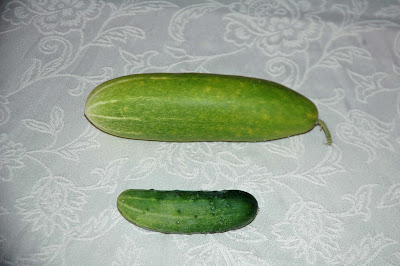 Barb was out in the garden and pulling grass and weeds. She noticed a cucumber vine going through the fence. At the end of that vine was one cuke that was growing like mad. Almost got away but it is still the size we can eat. 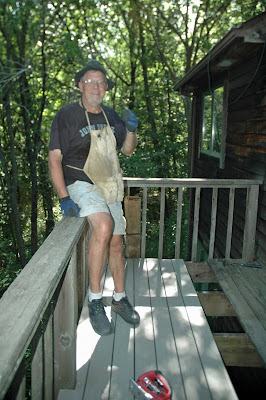 I woke up this morning with that stiff and sore back that tells me that I need to stop lifting those deck boards with my back. This has, in the past, been the precursor to a pinched nerve and about three days of bed rest. Might just take it easy today. Wait, that's how I always take it.

Somehow my fifth grade math has just allowed me to make another mistake. I measured the deck on the south side and computed 24, 12 foot deck boards would cover it. I didn't even allow for a 1/8th inch gap and still seems like I am a couple of boards shy of having enough. I'm not finished yet so I'll reserve judgement as the pile dwindles. Now that the truck is running good a trip to Lowe's might be just the ticket for some time off. Who knows until the lumber pile is exhausted.

Did I mention that I love this time of year? The garden is starting to really produce and the produce at the store is really especially tasty. Barb found a cantaloupe yesterday that is bigger than most of the water melons. What's up with the water melons? All we have here are about the size that last one small meal. If there were three Petty's, it would have to have a twin to feed that many. Back to the plethora of produce. I hate it in the winter when the tomatoes taste like they are made out of cardboard. This time of year they are sweet and almost don't need salt to really hit the plate with a bright taste. To make it even better, I think we hit a new all time low temperature last night. It was in the mid 70's yesterday and was great weather.

Better go up and see if that melon is good enough to support all this fine talk. (It was)
Barb has a good eye and told me were the great pictures were on the camera. I added the four pictures to share.